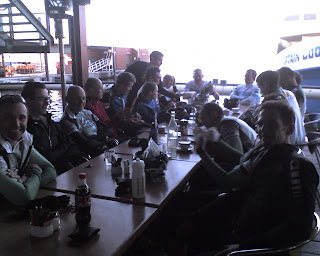 So, Pete asked me if I’d look after the flock as he was away racing. Wasn’t really sure but
since impending doom (aka fatherhood) had already meant I was missing the Collie –
Donnybrook I figured what the hell.
Another beautiful if a little cool start to the day meant a reasonable turnout.Nice to see the Barista boys joining us, meaning a little added heat to the ride, particularly with the absence of the young Mr Fynn.
So pleasantries over and done with we headed off on the intended route, a lap of the river with the added bonus of a trip via mosman park. A little more challenging than the usual trip down the coast.
A nice quick start with the headwind, along by Kings Park I asked James how quick we were going and 38km/h was the response. Whoops! It seems this early pace was hurting a couple of our less strong riders. The roadworks behind UWA meant a little rest at the temporary lights. Soon however young Lisa was suffering and without Ryan to offer his special kind of assistance Lisa was happy for us to leave her and with the group not waiting up I chased to get back on. Mr DH this morning met us at the end of our run through Dalkieth, nice Range Rover mate perhaps in your next life you’ll develop some patience. At least it was over and done with early in the ride.
So a brief regroup along the highway before we turned back along the river and since I hate the nasty climb behind the bowls club I hit the front in order to minimise my losses. The carnage after this climb was pretty bad with riders spread all down the road. A brief regroup at the water tower and off we headed towards Freo.
So at about this point I started thinking about the sprint along the Attadale foreshore. With no Ryan I figured I had a fair chance however Poulidor having joined the group was conspicuase by his absence. Jerard had been doing a Ryan and hiding down the back of the bunch.
Anyway we hit Freo and headed for Pt Walter at a steady pace pushing back into the breeze. I was happy to have done my share earlier and save my legs a little.
Things got split up pretty quickly along Attadale and the pace at the front was being maintained by a few of the suicidal gang. Six or eight or so were swapping off turns, I hung back at about 8th wheel looking to hit things hard with a couple of hundred metres to go. Things worked out ok and I managed to gap the bunch and stay away.
Another quick regroup but we had dropped a few by a fair margin, the usual end of ride mania meant we weren’t waiting for them. We kept rolling back up the Canning Hwy headed for coffee and breakfast and the pace was held at a consistent effort. Interestingly there were a couple of breaks off the front but with the head wind these guys were just testing themselves. The group was well together once we hit the Causeway and things started heating up. I was again hoping to get amongst it in the coffee sprint and new that this time Poulidor would not be hiding. It seems our banter from earlier meant that he was also watching me. We were both smart enough to avoid the front and with the Barista boys helping to keep the pace up this was easily done.
With a couple of hundred to go Jerard launched, I was caught behind a couple of wheels and had to wind things up a little too late to catch him. I was happy that I was able to close the gap if not catch him. So a good solid ride for me playing the sheep dog role and getting amongst it for the first time in a while. Happy to be feeling good again on the bike and use my brain to focus on and achieve some positive outcomes.
Good to see Mr Bonner out with us after his hiatus, if only we could all have two trips to europe per annum. And who was the young fella with toe clips? Props to you young man.
Coffee was fine, I have to recommend the bacon and eggs on toast, don’t know why more people don’t have a feed after the ride.
A bit of the usual bike talk after the ride but mainly James and I were tied up discussing the impending end of our cycling lives due to rapidly approaching fatherhood for us both.
Finally something to ponder; Did Jerard order his Cervelo S3, will he go for the Super Record? If so what wheels will he get to go on the new steed? For all this and more turn up next week and ask him yourself.