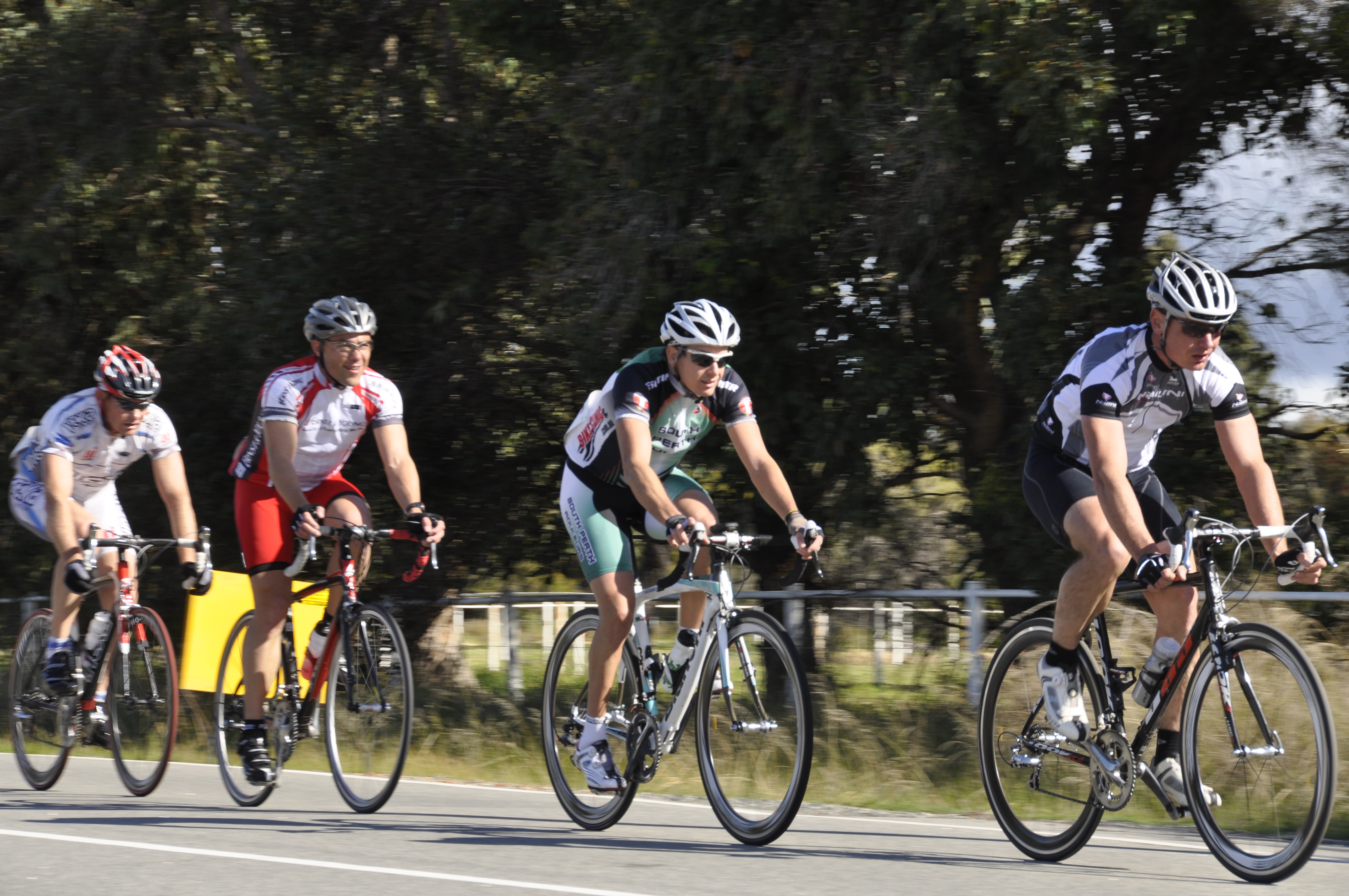 A nice sunny Saturday morning for a ride. Not a cloud in the sky but the wind was not going to be our friend today. A noticeable point in the car park this morning was the number of bikes with TT bars fitted. A lot trying to get a warm-up in before tomorrows TT Team race down south.

Peter was late to the car park but no one seemed to notice, all were happy to chat away. When Peter did arrive he used the excuse family commitments. He called for the fast group to take off and this seemed to be a big call as no one was willing. All reckon they were saving themselves for tomorrow. Eventually a few took off. Next was Main one. Main 1 today virtually emptied the car park and only 6 of us remained. Seeing as no one was left Peter said looks like I have Main 2 too baby sit. Personally I think he was using the excuse to rest up for tomorrow.

With only six of us and the Transitional group caught by a truck backing up I said lets take the other exit. Peter agreed and so we rolled out. Because of our small number and the crappy wind this morning it was Peters choice to try and catch Main 1 and jump on the back of them. However this proved to be an already failed plan. Even though Peter and I lead out the four others at a rate of around 33 ~ 34 kph into the wind the combination of us getting every red light and Main 1 getting all the greens our chances of catching the bunnies in front seemed to be drifting away. For the first 5 – 10kms of the ride they were still in sight but catching proved to a failed attempt. Once they started a roll through and their numbers being between 30 – 40 riders we had no chance and they disappeared into the distance.

Knowing I was in the orange zone sitting on the front with Peter who was not even into the 100bpm a minute range I took the chance to down a power bar during the roll through on Great Eastern Hwy so that later in the ride I would have the energy I needed for Ridge hill.

The ride out from South Perth and down into Helena Valley was a good one with the roll through flowing nicely and the group keeping close together. Before long we arrived at Ridge Hill Road. I quickly dropped to the back and then quickly got back past Katie and Ivan. Kat and Wade had already managed to pull an extra 40 – 50m gap on me and I wanted to get them back. The whole way up Ridge Hill I thought I was catching them but was mostly only holding the gap. I glanced behind a couple times and saw Ivan and Katie around 100m behind and focused back on the front.I heard someone catching me and put a couple of hard pedals in only to find it was Peter checking I was ok. GRRR wasted energy 🙂

With a quick regroup at the bottom of the Zig Zags we saw two groups of the fast group go flying by. They must have made up their own route. Most were crouched over on TT bars warming up for tomorrow. After a quick pep talk from Peter we rolled out down the other side of Ridge Hill road. I got a nice rhythm down and peddling away seemed to pull a large gap on the others when I looked behind after going through the round about. I sat up and slowed down waiting for them.

Right onto Kalamunda road and we paired up. Finally with a tail wind it was a nice relief. cautiously we navigated down Kalamunda road and I dropped to the back to make sure we didn’t loose anyone while Peter lead the way. I have driven this road a million times and recently it has had a number of cyclists making their way home from work in afternoons.

Right onto Great Eastern Highway again for the short overlap of our earlier route and onto Guildford road. The old Guildford Hotel which burnt down a couple of years ago now has hundreds of socks on the fence and signs asking for a new owner to buy and rebuild the place. If you got any spare cash lying around and want to buy a pub I hear it is going real cheap.

For the first few kms of Guildford road I obeyed the group and kept the speed down at around the 33kph mark. However the tailwind and my second wind was itching to open up the taps a little. as I made my turns on the front I started to creep up the pace. As we made the approach to pass my place it was on and I broke away. Kat and Wade appeared to break with me but left me on the front to set the pace. Rolling past King William and up the hill we were over 40kph and as the road started to bend upwards I was on the pedals and putting in some real hard pushes. Knowing it wasn’t going to last I forced it to go until the crest. Lights at Garret road and Wade came up to have a turn on the lead for which I was happy to get a rest.

As we rolled through Maylands I put a few more hard pedals in again to the top of the hill and wade jumped back on the front again but Kat also came with him and got in front too. They lead us down to East Parade. When the lights went green Kat was off and I quickly got on her wheel and sucked it until the lights. On the green Kat and Wade were of and I was close behind. Katie, Ivan and Peter were not too far behind. Approaching the hill in East Perth Wade got by at the bottom and I was close on his tail and we both got to the crest with only about a 5 – 10m gap. Easy cruise down the other side to riverside drive. Just as we got to river side drive the lights went green and I jumped. soon up to 40kph and I thought I had broken away however with about 250 – 300 before the lights Wade came from I guess behind and beat me to the lights. From here was a leisurely cruise into the bell tower. Even though it was a small group was still a good ride and I enjoyed the higher pace from my break on Guildford road. Hopefully next Saturday I will finally be on my new bike if all goes well.