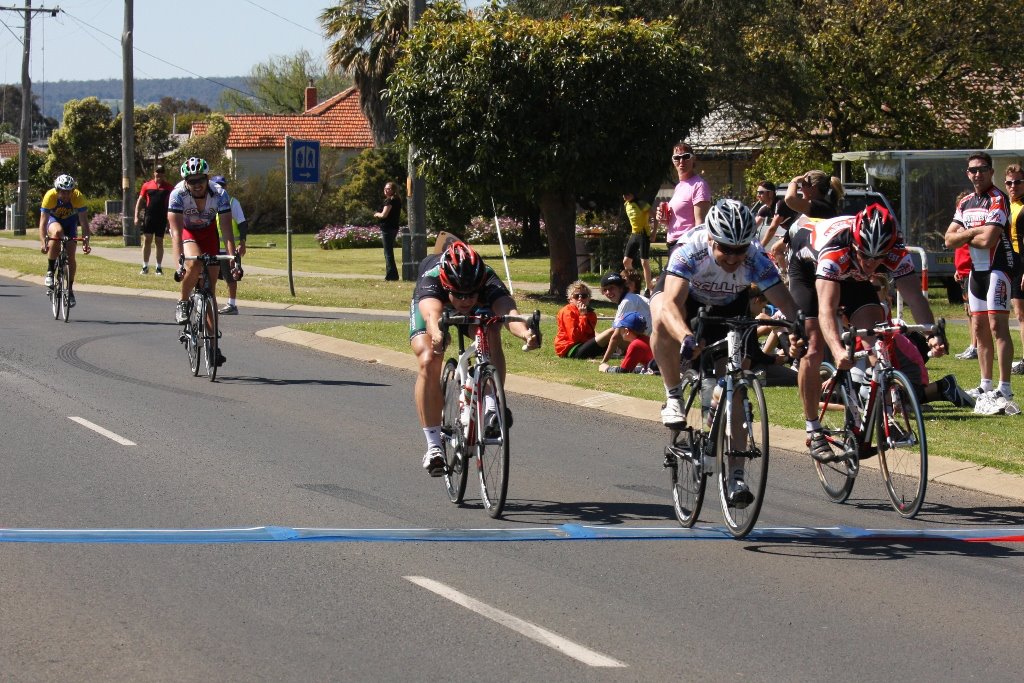 Oh man what a tough day at the office!

Last time I raced Dardanup I entered C grade and got dropped on the first few climbs.  I ended up riding home with Mino that day.  So I wasn”t expecting much from myself today.  But with memories of that C grade disaster in my mind I resolved to work as hard as I could to get over the hills this time.

Usual quick chat before the race and it was decided that we would launch attacks off the front from the word go to try and cease control of the race.  The idea being with one person up the road the rest of the SPR boys could sit in and get a cruisy ride.

We set off at a brisk tempo and Peter got things started by launching the first attack at about 5km out.  He got about 300m up the road and hung there for a while.  Eventually the group, lead by Erik from Collie and a guy from TCWA brought him back into the fold.

I immediately went up the road as soon as Peter got caught.  I was out there for about 3 minutes before the group brought me back.  As soon as I was back into the pack Carlos launched a staunch attack up the road!  I knew it was Carlos attacking before I saw him because I heard the Carlos “whoosh whoosh whoosh” coming up from behind.  Unit.  Carlos stayed out there for a fair while.  I think the group was wondering what the hell was going on and who was going to attack when they brough him back.

Had a quick chat with Ashley and he said he was feeling good and wanted to attack on the first hill.  Sweet.  Carlos got pulled back shortly before the first climb.  We rounded the corner and went over a couple of rollers before Peter and Ash launched a double attack up the climb.  There was no chance that a SPR duo was getting away so the everyone upped the pace to keep it together.

The pace dropped off and the parcours became slightly more favourable so I took another turn going off the front.  Again it wasn”t long before I was brought back to the pack.

This was followed again by the familiar sound of woosh woosh woosh Carlos barreling off the front.  Unit.  Once again though SPR wasn”t being given and inch and after a good 10 minutes out there Carlos was brought back again.

At this point we were just getting to the crest of the climbs on the way out.  It was all down hill to the turn around point.  We clocked just under 80km/hr on the descent.  I was thinking on the way down that, as enjoyable casino pa natet as the downhill run was, everything that goes down has to come back up again.  So despite being absolutely hammered from the climbs I forced myself up to the front for turn.  Didn”t wantto have to chase back on from a dead stop turn and then have to climb again.

I was about here that my heart broke a little as I saw Carlos on the side of the road fixing another puncture.  Damn.

So sure enough we start the 2km climb back up the valley.  Ash came to the front and lifted the tempo.  I just put my head down and chewed stem like crazy.  By the time we got to the top I was seeing 104% on the Garmin and my body was screaming at me to stop.  I managed to hang in and catch my breath, but then we started going up again. This was too much for me to handle.  I started drifting from the front of the pack, which was down to about 16 guys, to the back.  Then next thing I know I was out the hoop.  I threw it in the granny gear and keep spinning as hard as I could.  But the gap kept getting bigger until the follow car moved around me.  Not a good sign.

Once over the top I heard a voice from behind calling out.  It was big vaughan from collie who rides with out club a fair bit.  I decided to wait for him and hope we could work together to get back on.  Luckily the group didnt have the hammer down and the parcours were all down hill.  With gravity on our side big V and I turned ourselves out to get back on.  I was really impressed that the whole Collie club gravitated to the back of the group to help us get back the last 50m or so.  Helped a lot.

Not long after we rejoined we were about 15km to go.  Ash launched a brave solo attack on the last real climb and went on what was about a 8km solo effort.  Peter and I sat on the front of the bunch and kept the pace down to give him the best chance we could.  But eventually Erik from Collie and another couple of guys came to the front and started closing it down.

Quick chat with Peter and it was decided that he was going to try one last attack on the run into the finish.  As soon as Ash was caught Peter launched.  It was too close to the finish at this stage though and nobody was letting any thing go.  He took about 5m before everyone was back together.

For the last 2km the pace was right up in the mid 40s.  It was a stiff head wind for the sprint so I was keen to leave the sprint as late as possible.  Vaughan launched a huge early sprint that nearly caused an upset. Everybody was desperate to grab a wheel and there was a fair bit of bumping elbows on the run in.  I had to elbow a guy in the side to hold my wheel.  About 50m from the line Steve from Collie kicked it and moved sharply from the left of the road to middle cutting me off.  I had to check my line and then try and make up the lost ground.  I managed to drag myself up for 2nd rolling past a SWCC rider to claim the Golden Gnome.

All in all it was a really good race.  Definitely one of the best ones we have ridden as a club/team.  Huge respect to Peter for riding so aggressively – the best ride I”ve seen him do for sure!  Even better SPR cleaned up the interclub champs with Cameron and Jonno taking home the gnomes for C and A grade respectively.