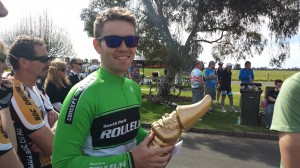 I had been looking forward to the Dardanup Open for almost a month, I’d heard nothing but good things about it, and after months of not racing I couldn’t wait to put the race wheels, pin on a number and get out there. I was a little nervous about the TTT though, not ever having done a timed event before, my usual race strategy is ‘hold on, then sprint’ I wasn’t really sure how to pace myself, but mostly I just didn’t want to let down my teammates on SPR1, Andrew Ballam, Stuart Ivins, Dave Manners and Sam Luccitti.

Finally the day was here and with Saturday’s temperamental weather I was thrilled to wake up to a beautiful spring day, a quick breakfast and as soon as the car was packed I was on the road for the 2 hour drive down to Dardanup. As usual Pete was there with the SPR tent providing an excellent meeting point for all SPR riders to catch up, talk tactics and have a well-deserved coke after the race and it was here that I learnt of our Director Sportifs (aka Pete) plans for today’s race. With a substantial numerical advantage over the rest of the field SPR 1 and SPR 2 would join forces and send riders up the road from the get go in an effort to make the other teams chase and hopefully tire them out, besides myself and Dave who were ‘protected riders’ we were to sit in an save ourselves for the expected sprint finish. No pressure!

I rode back to my car and jumped on the rollers for 20 minutes to wake the legs up after the drive for what promised to be a fast, attacking start to the road race. I couldn’t see much of what happened in the first couple of km’s, but it was pretty strung out and I remember seeing at least 3 attacks go clear before Andrew’s finally stuck, solo at first and then joined by a SWCC and BDC Drilling rider. At that point everyone seemed content just to let them go, everyone was represented so why bother chasing. From what I could see it looked as though John Gilbertson did the lion’s share of the work setting a nice steady tempo on the front for most of the race.

At the first hill the field split up a bit, I took the chance to move up towards the front and saw a small chase group form up ahead; again it had all teams represented and SPR had the numbers with Dave and another SPR rider (who’s name escapes me at the moment sorry [it was james – elPrez]) so no one was really keen to pull them back in. By this point Andrew was well out of sight and the chase group were just lingering in no mans land. After we turned off Furguson Rd the chase got so close I thought it was all over for them, but after our DS bridged across ‘to relay a message’ they were gone and Pete dropped back into the main peloton with the rest of us which was still being passed along nicely by SPR.

We soon lost sight of the chase group and I assumed that that was going to be the winning move and just hoped that Andrew could stay away or someone from SPR could still take the sprint. Coming into the base of the major climb of the day and the start of our return trip to Dardanup I was feeling fresh thanks to the work of my teammates and sat towards the front of the SPR and SWCC lead peloton hoping to conserve as much energy as I could now for the TTT, but as Pete launched an attack and I followed wheels the road opened up and I realised that the chase group weren’t that far in front. Stuck hovering only a dozen meters off the front I bridged over to Pete who had successfully strung out the peloton and dropped many rides as planned and that got the remainder of the peloton.

Still feeling good I tapped out a rhythm on the front until eventually others started to roll through. We put on a pretty good run down the other side and after Sam put in a killer turn we could see the front of the race, Andrew was out front all on his own with the chase group catching him. It was then that we decided to bring it all back together for the planned bunch sprint. It took longer than I thought, but everyone worked well together and gauged their efforts perfectly as we caught the chase as they caught Andrew and with 5k to go there wasn’t much time for those in the breakaway to recover before the sprint. Dave made sure he found me in the bunch and although he had been in the chase group for 20 odd km’s assured me he was still fresh and that he’d wind it up for me at about the 400m mark, again no pressure!

From there it was almost a dead straight run into the finish, there were a couple of little rises that put a sting in the legs and a slight headwind coming from the left but with the whole peloton fighting for time bonuses the most critical part was positioning. Luckily for me Dave had put me in the perfect position, about 8 wheels back on the outside and to the right, I was out of the wind, could see what was happening and most importantly I could move. It was such a good spot in fact that I had a SWCC rider try and wrestle me out of it. I couldn’t tell you how long I was sitting there waiting to see something that would tell me the finish line was close but at about 1km to go John attacked in a solo move and the whole peloton responded, I just made sure I was glued to Dave’s wheel. This strung things out a bit more and gave everyone a bit more room to move an no sooner had we caught John than a SWCC rider launched an early sprint from behind coming around the outside on my right with about 500m to go. I was too slow to grab his wheel but Dave took off after him getting me up to speed and virtually on the SWCC riders wheel. Somehow during the ensuing panic someone rode into the side of me, from the impact I was sure he was going to go down and while I didn’t hear that unmistakable sound of bike and rider hitting the ground I did sense that it had slowed everyone around him and especially behind him but someone else will have to verify that because I couldn’t see. I started my sprint about 300m out and caught the tiring SWCC rider with about 250m, knowing that there was a traffic island at 200m to go I sat on his wheel until we were clear of it and then launched again for the line. Presumably without knowing it as I started to come past him the SWCC rider cut straight across my line and pushed me onto the wrong side of the road, but with about 150m left I was able to reset my sprint and get around him for the win.

That’s my first B Grade win and I can’t thank everyone enough, from Andrew with his 30km solo breakaway to Dave for his amazing work at getting me into the perfect spot to everyone that pulled a turn on the front so that I wouldn’t have to. Now normally that would be the end of the story, but not today, we still had a 39km TTT to race. 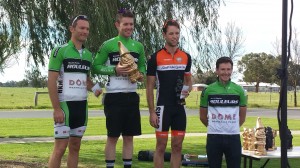 After the usual debrief and coke it was time to start thinking about the TTT, I headed off back to the car to jump back on the rollers and grab a fresh bottle then before I knew it was time to head back to the start line. You’ll have to forgive me as my recollection of the TTT is a little blurry, but that might have something to do with the 180bpm average HR, either way I remember we had a great start with everyone rolling good turns then we lost Stuart Ivins to a puncture just before the first climb and there was only 4 of use left. We all worked well together and there was very little need for talking, I felt good until halfway up the main climb where I started to feel my left calf cramp, something that I’ve never felt on the bike before, but luckily with a few downhill section on the run home I was able to sit on the back and stretch it out, have something to drink and it was fine until the end. Everyone gave 100% but I think that Andrew deserves a special mention after having spent almost the entire road race off the front by himself and he even managed to drop Dave and I with a couple of km’s to as he came to the front for his turn. We ended up taking out the TTT too ahead of SPR2 with SWCC coming in third. This saw me claim the overall with Sam 2nd SWCC’s Joel Hodgson 3rd Dave 4th and Andrew 5th, I’d be interested to see how the time bonuses work/what they are for a SWCC rider to split us like that when they were nearly 2 minutes slower than us in the TTT. 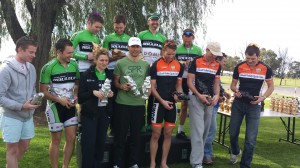