Right, well, for those of you who know me, you will know I am a very committed “coffee and cake” type rider, so I can only blame a complete lack of synaptic connections that resulted in me putting my name down for the ToMR. Our team consisted of Anna Massey (mixes it up with the Fast SPR boys, great hill climber), Amanda Nabi (also mixes it up with the Fast SPR boys and riding so very strongly this year), Alison Ramm (has no idea of how to give up and can keep riding all day, oh and did I mention she represented Australia in the UCI this year?), Anna Schwartz (have you seen this lady in a TT? Strong strong strong. Also represented Australia in the UCI), Emma Goodwin (consistently strong, loves a good crit and I have it on good authority that she has been following a training program devised by none other than Mr Toby Brown himself) and me (Meghan Thomas).

The sheer terror at the idea of being dropped in the first five minutes of what was reportedly a hilly course saw me actually asking my partner (Carlos) for a training program. Me, a training program!?!? The end result of this little deal is that I found myself doing some absolutely horrible spin efforts while Carlos had a great laugh at my pain face – thanks babe!

I am proud to say that we managed to get together a couple of times to practice our TTT techniques (thanks Davina for giving up your time to help us), to have dinner as a team (thanks Anna and Tom for hosting) and, more importantly, to order some team socks. So after working hard to be in shape, the teams final preparations were less than perfect. I got food poisoning on Wednesday night before the ToMR so my final preparations involved getting rid of any and all food that I may have had on board and not eating for 36 hours. Carbo loading – its over rated. Anna S had unfortunately had a significant bike accident and being able to use her right arm was a bonus. Alison had a fantastic lung infection and the noise of her coughing up said lungs is a delight that will stay with me – she is one tough lady. So out of 6, three of us were more than a little curious to see how we would go.

Our rough game plan was to protect Anna Massey and Amanda. Beyond that we were a little vague. It is not often – well never – that there is a womens only race and that 54 women turn up to the start line. It is exciting to see this growth in womens cycling and we would like to acknowledge the support of SPR, Hall Cycle Training, and the South West Cycle Club for organising and supporting such a great event and for encouraging womens racing: we actually felt like we were part of things as opposed to an afterthought. Thank you!

First stage of the Tour was a team TT, I had managed to eat a croissant by this point and was just happy to be at the start line and not throwing up. The girls worked really well together and I think we did a good job of communicating and working together. We came in second, a minute behind Halls Cycle Training 1. Unfortunately, we did all manage to cheer and encourage the SPR elite men as they came flying past us…which probably indicates that we could have been riding a little harder…..room for thought and improvement for the future. 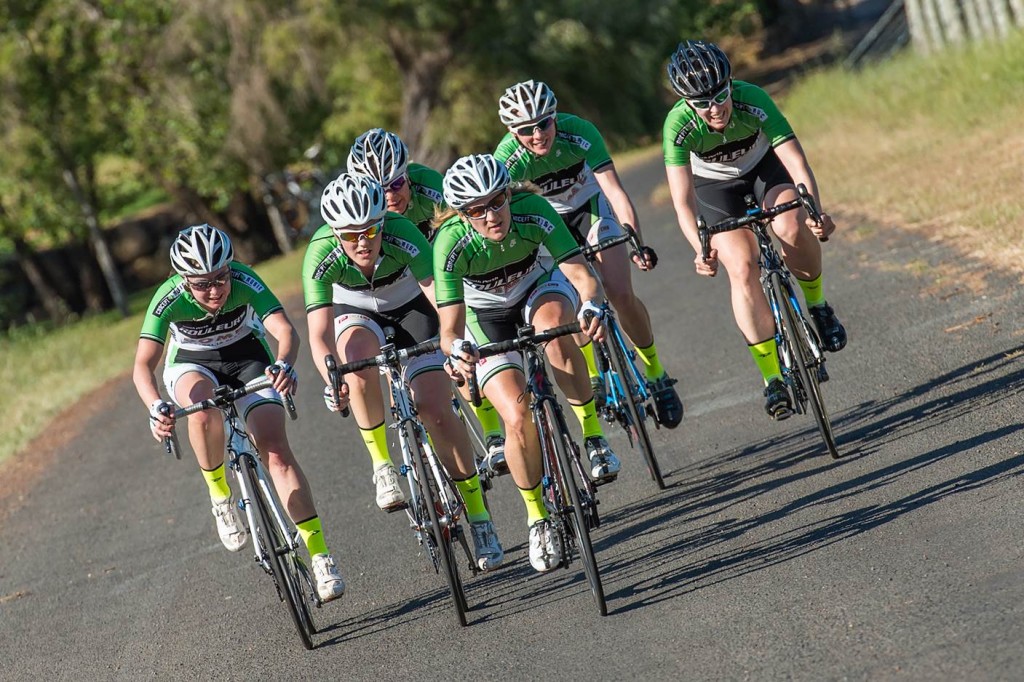 The rest of the stages were largely about protecting Anna and Amanda as best we could. We were slightly outnumbered as there were 3 Hall Cycle teams (i.e. 18 riders against 6). Stage 2 on Saturday morning was two laps with a couple of hills towards the finish line and time bonuses on the first lap. It was interesting, and actually great fun, positioning and ensuring that we were close enough to the front to catch any breaks in a group as large as this. Those bloody white lines on the road started to get a bit annoying J. Anna S did a massive turn on the front at the start, Emma gave it a good couple of goes, Ali was a machine and Amanda and Anna M were great at keeping themselves out of trouble but towards the front of the pack. Incredibly pleased and proud that for the sprint points Amanda came in 2nd, and Anna 3rd, and overall Amanda crossed the line 2nd and Anna came in 10th.

After a quick massage by Cathi and some refuelling we were back out racing by 11am. Happily I was starting to feel better and had actually managed to eat and drink. Even better there was only one slight hill in the kermesse race – I have since decided that this sort of course and race is something that I enjoy a hell of a lot more. I thought it was about time that I contributed something significant so did a fair bit of work on the front. Played a bit of cat and mouse with the Hall girls, but over all we controlled the race pretty well and with some great effort by all of the SPR girls, Anna came 1st in the kermesse intermediate sprint. Overall Amanda finished 8th and Anna 10th. Another great result.

The final race of the day was a 75km trip to Augusta with a small hill to conquer at the end. Same game plan. Protect Anna and Amanda and then let them do their thing on the hill at the end. I think the Hall women had the plan of going as gently as possible for the first 40km and then start sending riders out to attack thereafter. Since there was only 6 of us and 18 of them, we were a little weary of attacking too much too early. Come the 40km mark the attacks started and Alison and Emma did a sterling effort of covering e.v.e.r.y single move the Hall women made, they were incredible. We got Anna and Amanda to the base of the hill and then Anna buried herself and came in a resounding SECOND!! Amanda also dominated on the final hill and placed 8th. I was much too far back to give a blow-by-blow description of this part of the race. Anna S’s Italian UCI TT racing came to the fore as she powered up the hill to finish 14th, I managed 17th. Despite doing so much work throughout the race Alison finished 19th and Emma 25th.

Overall our team placed second, with Anna placing 6th and Amanda 7th in the race for the pink jersey. So the game plan seems to have worked!

Lessons learnt: we probably need to work a bit harder on the TTT to make sure we start in poll position.

Highlights: great team, great womens field, Tom’s coffee first thing in the morning, spa after the TTT, the SPR tent and esky full of drinks, hearing the cheering as we went past, the SPR men at the finish line handing us drinks and taking our bikes (it felt so pro!), sense of camaraderie that comes with being a member of SPR, Cathi’s massage, obviously the socks, feeling like we were an important part of the tour. Did I mention that the SPR womens team was awesome?!!

Lowlights: riding back to Margaret River from Augusta. Jordan offered us a lift, Anna was smart enough to take it, I was too stubborn and so ended up chucking the biggest whammy when we got to Margaret River and refused to ride a single pedal stroke further. Apologies to those that witnessed it J. Being outdone on the sock front by another SPR team that had different matching socks for each day of racing.

13 thoughts on “ToMR All Female Team”