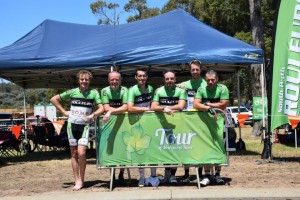 Team SPR 2 was finally settled in the week before the Tour. Unfortunately we lost Simon to jury duty early on and after some final toing and froing with SPR 1 and 3, the line up consisted of Ben, Danny, Craig, Jordan, Julian and Justin. The constant changing meant that unfortunately that TTT practice with the whole team didn’t occur before the event, but nonetheless we were all eager to get down to Margaret River and into the racing. Craig organised the accommodation, a wonderful 5 bedroom house in Gnarabup called Point Break. Dinner duties and shopping were assigned and we were to rendezvous at Point Break on Wednesday evening, minus Danny, who couldn’t get down until Thursday morning. Jordan supplied pulled pork for the first dinner and we talked away the evening planning tactics for the 4 days of racing.

Thursday morning arrived and we went for a warm up ride into Margaret River for breakfast, then up to Cowaramup to do a reccie on the course and also to meet Danny. The wind was blowing already and we steeled ourselves for what was to come. After doing final registration and collecting the race pack, we headed back to Point Break for lunch and final preparations, before making the drive back to the start and saddling up for the time trial. On the start line we found ourselves with one eye at the back of Cam Meyer, who was with one of the Satalyst tams. The other eye was focussed firmly on the clouds, which were darkening and fast as the wind was picking up.

Finally, we were off and after 1 km we made the turn and confronted 5 km of head winds. We tried to keep formation but this became increasingly difficult. We lost Jordan just after the climb in the vineyard and Justin and I weren’t feeling the best. The tail wind reprieved us, but towards the end of the first lap, Justin and dropped off and the rain started.   On the second lap I started to struggle into the wind and Craig did his best to keep the 4 of us going together. His constant yelling at me to get in line was well meant, even if I wasn’t appreciating it at the time. We then passed the Satalyst group (including the race pro!) but no photographic evidence is available. I really struggled over the last 5 km and was very glad to get across the line, although the time was a bit slower than we would have liked. We waited around in the wind and rain until the end and found out we ended up 39th overall and in Category 4. Then it was back to Point Break for Justin’s Spaghetti Bolognaise and discussions about the road race tactics. 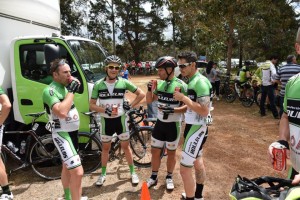 This was the day I was looking forward to most – a ride down Caves Road through Boranup Forest and a nice climb at the end. Craig and Ben decided they’d try and get in any break aways that formed and leave Danny and I to enjoy the final hill, if they couldn’t stay away. Ben had a few nervous moments at the start, but apart from that, the team was ready to go. The pace was on from the start and no one could get away. Craig tried a pre-ordained move near Mammoth Cave that was unsuccessful, so we all sat in until we turned off Caves Road and into the turns before the climb. Unfortunately, by this time the rain started and safety considerations meant the turns were taken slowly. As the final climb neared, the group started to split and Craig, Ben and I got towards the front. We then caught the back of Group 3 and this caused a bit of confusion. Poor positioning meant I got held up behind some of Group 3, and once I was out, I had no idea who was where in the order. I pushed up the hill reeling in riders and crossed the line feeling OK. A quick check of the results showed I’d came in 7th, but I couldn’t help thinking it should have been better. Ben and Craig followed behind, with Danny, then Justin and Jordan bringing up the rear of the team.

We than rode back into Augusta for morning tea and to warm up, then had a tail wind riding backup to Margaret River. Lunch at the Settler’s Tavern was followed by a relaxing afternoon and Julian’s Chicken and Potato Green Curry for dinner 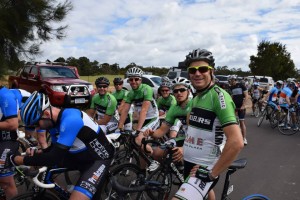 A fast and furious day was in store on a lumpy stage to Rosa Brook. The hill about 5 km out from the finish interested us and we decided to keep towards the front throughout. As with the previous day, no one was able to get away, with the group keeping a good eye on things. Along Redgate Road the pace picked up and into the last 15 km it was clear that a sprint finish was on the cards if we couldn’t get away on the last hill. Not fancying my chances in the sprint I pushed the group and at the top about 10 of use, including Ben and Craig had a slight gap. I yelled out to keep it going but other teams weren’t keen on working and we were caught on the first bit of the descent. The last few kms were a free for all with Craig and Ben doing some great work to get to the front. In the end Craig went a bit early and finished 4th, with Ben also getting in the top 10.

We caught up with the other teams for a chat and watched the other Categories below finish before heading off on the Social Ride back to Cowaramup. Whilst this ride sounded good on paper, it was a bit too long and with the sun starting to come out, we were feeling a bit tired by the end. Another pub lunch improved the mood, before we headed back to Point Break for the social highlight of the weekend – a viewing of the film Point Break, made all the more special by the fact that Ben hadn’t seen it. With Justin and I quoting some of the more memorable lines (young, dumb etc.), and Patrick Swayze and Keanu Reeves in fine form, the hours flew away before a sumptuous evening BBQ dinner was prepared. 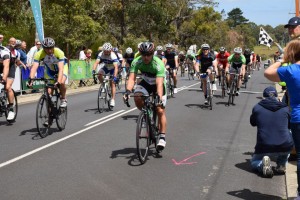 The final day’s racing and finally the sun was out. It was quite disheartening doing the warm up with families in the surrounding houses preparing to go to the beach. We were off at 9.30 am so at least it wasn’t too hot at the start and the wind was light. Team tactics consisted of sitting in fort he first lap and watching out for any attacks. The first lap passed without event – a few tried to get away but were quickly reeled in. On the second lap Craig instructed me to ‘Light it Up’ and off we went for sojourn in the front. Needless to say it didn’t last long and by the final lap the group was pretty much together. As the pace quickened in the final lap a few people started dropping off but the team stayed together pushing each other on. Finally the sprint arrived, with Craig and Ben in best position. Ben timed his run pretty well and came in 3rd, with the race won by Steve Hedley, an ex A-grade rider who now resides in Broome and who used to ride with SPR a few years back.

So that was the end of the tour. We had a celebratory beer as we watched Cat 2 in the next race and reflected on a good few days of racing. The legs were very tired and I was looking forward to not having gels for a few days. Overall the team was pretty pleased with the effort and we improved our position from 39th on the first day to 25th by the end. On the non-racing side of things, we enjoyed the relaxed atmosphere of Point Break and cannot recommend highly enough, a house on the coast as a base – close enough to Margaret River to ride in and not too far to drive to the start. Next year, we’ll need to plan the trip back from Augusta in order to avoid the long ride back. For me, the highlight of the weekend for me was the descent in Boranup Forest on Caves Road, as well as the general good feeling in the peleton during each day’s racing. The others also had their special moments as well and it’s worth mentioning Ben’s – he got to see Keanu Reeves jump out of a plane!!