Greg Murray
In 11 weeks, I went from broken, bruised and dislocated to my best race result ever – and in a 5 stage multi-day Tour, no less. The ToMR event that I thought I would be missing, and maybe should have, ended up being amazing. After a nasty crash at Pickering Brook in late August and having dropped a grade as I lost fitness and time off, I was teamed up with Andrew Williams and Mark Tancell from last years’ ToMR team again, and combined further with Graham Hoskins, Jon Hansen and Liam Walker.

With some limited together time in the lead up, the TTT was the first stage off the line. Not the best TTT as we struggled in the strengthening head winds on the backside of the course, but not the worst apocalyptic conditions held off until seconds after we finished. Placing 6th in the TTT for Group 7 (mens Cat 4) we set about a strategy for the road races. Which was simple. Feel good – go hard. Feel better – stay safe and protected. Feel ordinary – do the protecting as long as you can. We managed mid-field placing and missed the weather turning nasty. Where missing the nasty only meant 40km winds……. 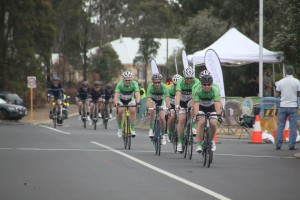 Stage 2 was last year’s final stage – Cowaramup to Augusta Country Club. Essentially,75 undulating Kms and then 3kms straight up at 8%. Quite a conservative speed to begin with and a mostly well behaved peloton saw the Km tick over gradually, with a consistent headwind most of the way. The field split with riders popping of the back on some of the pitches resulting in about half the field together at the series of 90deg corners, right then left then right, each with a share of gravel and obstructions through different lines. I managed to stick in the front 12 riders and get through clean, but mark who spent most the day on front swept off with a puncture on the very last corner. Tough break for a solid days work, and apparently his first flat in 2 years of riding with SPR…. I hit the base of the hill at 14th wheel, and held the front runners in sight, passing three riders to place 11th for the day. Andrew came through in 32nd, Jon in 26th, Graham in 25th, Liam in 38th and Mark angrily in 36th. Oh, and I beat OGE’s Mitch Docker. SCHWING!

Stage 3. Feeling strong and a good vibe in the team today. Heading from Cowaramup to Rosa Brook, Mark and Jon played off the front all morning, with Graham and Andrew rolling up and down in comfort. I placed myself towards the front with some safe protection from the wind. As we hit Redcliffe then Witchcliffe Rd the pace ramped up and the contenders moved to the front in readiness for the narrowing pave road and todays’ big f*$*$n hill. Which, for the record, was four hills with some deceptive flat in between and nothing like the ToMR website profile. Hanging with the lead bunch up the steep pitches, there was a lot of digging deep, but so were the other guys. Except for Docker, unsurprisingly. The Final corner at the top of the hill saw a lull in pace and a clear inside line, so I punched it to see what would happen. With 5kms to go, the front bunch was on edge and jumped on my wheel. I eased up and the group started to widen and compress and jump and ease. With 60km defined, but a 60.6km real race distance, a few jumped too early. At 500m sign, it was on. The early jumpers faded and I weaved through the mess of unheld lines – and there were several… – to pick up 9th on the line and move to 8th overall. Mark arrived in 25th, Andrew in 39th, Jon in 28th, Graham in 31st, Liam in 26th and. Casually beat Mitch Docker again. As you do.

Stage 4. Why? No timing and the front groups sent on a casual 26km route, whilst we punched out a 47km route. Unhappy, with 110km in the legs and serious cranky pants, we
retreated to Vintners Ridge for more food, lots of water, Powerade, Coke and possibly some beer and vino. Pity we were too far for the other SPR groups to come to the BBQ that night, but thanks to Brian, Di, Laurensia and Jay for making the trip to Yallingup for a solid feed, good chats and allegedly some beer and vino.

Stage 5. I feel selfish, but held a good position with some potential to get higher. Stage 5 is a 17km circuit, tailwind on the back of course, headwind on the front and undulating at its’ worst. Fast. Legs felt dead in the warm up, and I questioned whether sending everyone off for their own adventure would be fairer. Big Diesel asked the question – what are we doing? Keep me out of the wind and give me space to jump if I have the legs left. No pressure. We headed off, and I sat in safely midfield. Legs felt better after half a lap and a caffeine gel, and the group wound it up. Lap on lap it got faster. On the final swing from Caves Rd into Fifty One Rd, I was at the back on Graham’s wheel. Somehow the wiley old bastard was able to weave from the back half to the front half, as if not even noticed. Damn Graham, how do you do it? At the run in to the newer and smoother estate road, I saw a gap down the left and punted all the way to Jon at 4th wheel, said g’day and settled in. What happened then – in my mind, at least – is like the Shimano camera footage from Giant Shimano in the sprint finish videos. With 2km the speed picked up and the group fractured on the second last rise, leaving about 20 riders and most of SPR together. At the bottom of the last little incline the pace really lifted, with Midlands Cycles, NBCC, the Joondalup Bears (true story) and PIHC all in there. At 200m there was a 10m gap on me with traffic. I managed to pick a line that, whilst narrow, was wide enough for my skinny little arse to get through. At 100m I was with a clear line, 4 riders ahead. At 50m I was wound up and catching them all, slid through to second on the road, and then with one final push just missed the win by less than half a wheel, NBCC’s Justin winning. Liam came in an impressive 15th, Mark in 19th, Andrew in 20th, Jon in 33rd and Graham in 23rd.

Last year, Mark, Andrew and I contested ToMR in the same grade and it could not be said we were overly competitive individually. This year, Mark may have top 10-ed stage 2 if not for a flat, and could not have caused more damage on the front, where he resided for four days. An absolutely huge step up in a year. Andrew. The Diesel. Just keeps going, and left Mitch Docker for dead on descents (gravity, inertia or some such rubbish, he says…). And he is due for an FTP review, just quietly. With Graham and Jon, the foresight on the road, the little key moves through the pack, the talking and teamwork was near seamless. Jon – what a camera whore. On Stage 5 there was nary a single pass by Tony Lendrum on the photo moto without Jon jumping chasing and getting his dirty big grin in another few frames – GOLD! Liam, who hasn’t raced much previously, was stellar with a great 15th place on Sunday. Three of us train with Toby Brown, Liam with Cathi Dixon and Graham has to chase Anke. Club members who give back a hell of a lot, and have made a significant difference for a bunch of guys that were a few hacks not a year ago. Fitness, racing smarts and support all in one short/tall package (dependant on coach..). We all seem keen for another crack next year, maybe in a higher grade – who knows? You should give it a crack too.