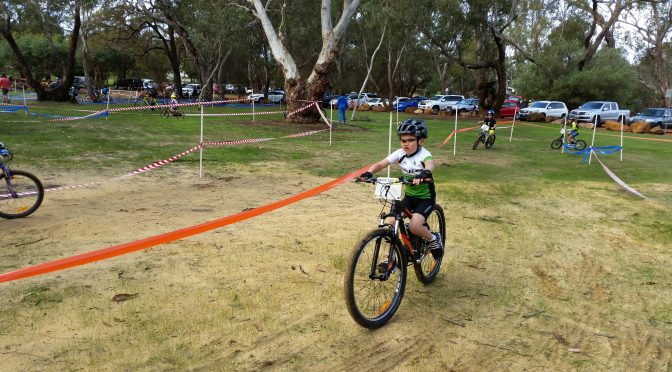 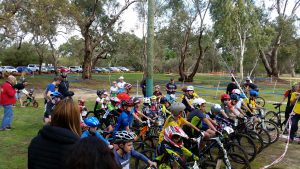 After watching the first cyclo-cross race at the showgrounds, Dad made me do the next race. I didn’t want to do it, but Dad nagged me all week.  My brother was going to a birthday party on the same day, so it would only be Dad and I at the race.

I got a new bike for Christmas which was a lot bigger than my last bike, so it would be easier to ride over obstacles.  We packed the bikes up into the car and headed out to Fishmarket Reserve in Guilford.  I was wearing my SPR jersey, so Dad could easily see me on the course.

There were about 30 other kids in the race ranging from big kids on cyclo-cross bikes to very little kids on balance bikes. I knew that Alex, CJ, Jehan and Riyani were also in the race. 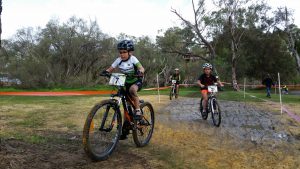 We started a warm-up lap, but I only got 3 seconds before all the kids were called to the start line.  The course was marked out by tape strung between plastic poles which guided us between trees and through obstacles.  The kid’s course was a lot shorter than the adult’s course and the race only went for 20 minutes.

On the first lap I discovered that the course ran through a very large, sticky mud puddle.  My bike got stuck in the mud and I fell over and was covered in mud.  When I tried to get my bike moving, my foot got stuck in the mud and it sucked my shoe off.  I had to walk through the mud in my socks to get the bike.  I wanted to quit the race, but I told myself that “I can do this”.  Dad helped me get my shoe back on and I started racing again. 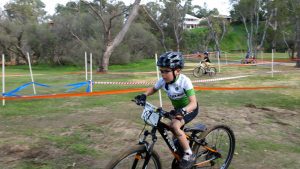 The course ran past the edge of the river and if you took the corner too fast, you could end up crashing into the water.  There was sections of thick sand on the course that made it hard to ride through.  I had to stand up on the pedals and push hard to make it through.  There were other sections of easier mud for us to ride through, but it made my tyres heavy with mud.

After the first lap I changed to the number 1 gear on the front and number 3 on the back which made it a lot easier to ride.  20 minutes is a long time to be racing but I managed to finish 5 laps of the course.  Each lap I had to get off and push my bike through the thick mud which meant that my shoes also clogged up with mud. 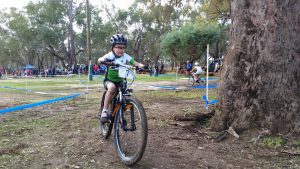 By the end of the 20 minutes, I was exhausted and ready to get off the bike.  It was a lot of fun being able to splash through the mud and ride with my friends.  Dad then did his race while I got to play at the playground and on our bikes.  Dad’s race was even messier and he finished totally covered in mud.  We had to clean ourselves and our bikes up before we could get back in the car.

There are another 7 races between now and September in and around Perth with races for all abilities.  We should be all going to the next race in June at Victoria Park. 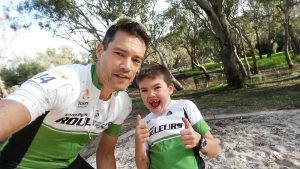