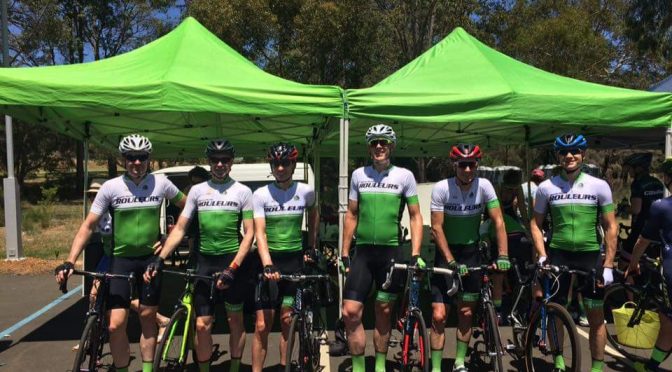 Wow. What a weekend. The Tour of Margaret River has come and gone for another year and for SPR ToMR Central, it’s time for race@SPR to switch off and recharge for a bit. As was reported in the previous post, this was a large operation. In fact the biggest Club coordinated race event we’ve attended, the biggest contingent the EVENT has had and a big o’l lump of cash money budget that we had to manage – it outspent the purchase of the SPR Van. The previous post was a gold mine for those who love numbers……

What was made more memorable and enjoyable – as well as more complex and busy – was the addition of one Annemiek van Vleuten – current world number 1, current world ITT champion and quite possibly one of the nicest superstars of cycling you’re likely to meet. Annemiek and her buddy Kim traveled out from The Netherlands as guests of ToMR, with Annemiek assigned to SPR as a Pro Register Rider. Annemiek has requested to be selected with a non-elite, up and coming or development-type team (sorry SPR W1, you are too fast!).

And I think that sums up Annemiek completely. She and Kim were so generous with their time and energy throughout the weekend. From emailing with them ahead of time, then meeting Annemiek and Kim at the airport, they were so relaxed and engaging. Not everything we expected, but so much more than we had hoped. Casually showing a UCI Rainbow jersey (“It’s a new one, but I don’t get to wear it at Margaret River!”), chatting about backpacking through Australia previously (with Marianne Vos, as you do) to talking about the importance of long friendships like Annemiek and Kim share going back to 3 years old in Kindergarten.

Kim too is a gem. She had a crack at racing a few stages as a guest of ToMR as well, albeit on Jordan’s old bike (with which I have a personal history, but that’s another story!). We had pledged to get Annemiek out of Dutch Orange and into Green, even if only briefly, and we even pulled this off successfully by the Team BBQ. It was like they had been with the Club for years. But maybe that says as much SPR as it does about the Dutchies. Needless to say, what you see in the photos with Annemiek and Kim was just that – a snapshot. The banter and the laughs and the chatter and the smiles were there throughout the whole weekend.

SPR entered seven teams of six racers each this year, with three women’s, three men’s and one mixed. Being a Teams-focused event, the results were aimed at a points-based Teams format, with the TTT times based on the 5th and 4th rider times and the road race results based on the combined time of the first three riders from each team. It is a unique format for WA racing and really forces the teams to embrace a team mentality.

The event this year was based out of the town of Nannup and raced over four stages:

All the teams rode hard and proudly all weekend, but there were some very near misses on big results for the teams SPR M1 and SPR W2.

SPR Men’s 1 had the lead all the way from stage 1 in Division B and held it until the last moment, getting pipped by one point in the final TTT to get the closest of 2nd places. The guys rode out of their skins and thoroughly deserved the win – just check out the Beardy McBeard photos here of award winning pain faces from M1! John Carnicelli and Elar Kalda both gained top 5 finishes over the Road Race stages. We’ll hear from Elar in the Race Reports to come.

SPR Women’s 2 had a tough but hugely successful weekend out. Sitting 2nd after stage 1, 3rd after stage 2, back to second after WINNING stage 3, and it was just 90 seconds difference in the final stage 4 TTT to take second place overall in Division. Stage 3 saw a big crash in the Women’s Division L, with several of the SPR W2 and W3 riders brought down, and two of the Veris Women’s Development team treated by the ambulance as a result. Seeing the surviving Veris girls dig deep and take the stage win was pretty impressive, while the bruised and battered SPR W2 girls fought hard for second place, battered bruised and two of them on borrowed or Frankenstein-ed bikes. Claire Tyrrell is contributing to the Race Reports as well.

Outside of the SPR teams, there were some very big results for SPR members riding in other teams. Matt Champtaloup, Brian Sing and Patrick Saccani-Williams racing for the Santic-GDT team took the overall Teams win for Open Division A, and Matt won the individual overall for the Open categories. Dome Coffee Cycling Team came second overall in the Teams with Dave Hind, Jarrad Anderson and Richard Langsford placing well individually. Adam Ralph’s team won Division D, and Feathers and Scales with George Rolt and Ken Nicholls contested hard in D as well.

Coming in third overall for the Women’s Division K were “The Leftovers” featuring our Dianne McAuliffe.

The event made more mainstream Cycling media as well, with CyclingTips posting a great article here. Ben Thorman features with yet another special wheelie pic up the Ballingup finish climb, which was super impressive until Robbie McEwen did it no-hands! Graced with the ever professional Matt Keenan and Robbie playing commentary,  an event-long home base at the Nannup Event Village, a bonfire and aBloc beers available (yes please!) it was a very slick production this year, and congratulations must go out to Rebecca Cotton and Brendon Morrison. You and your crew ROCK!

Our own race – well SPR Mens 2 outgunned ourselves on Stage 1 with a strong Team Time Trial netting us 36th overall and a place in Division D. We were front to mid-pack all weekend, but failed to get three to the line together effectively, and the team results in the Road Race stages suffered accordingly. Having suffering like dogs, and el Prez will attest to this, it’s still probably the most fun I’ve had on a race event away. SPR Mens 2 was a powerhouse of humour, ribbing and banter. And Crumpet. And we probably rocked the best team photos out on the road…… You’re welcome!

Organising the event was not without its’ challenges. Accommodating Annemiek and Kim was subsidised by all the ToMR squad. A few of the team members missed out on chances to more spend time with Annemiek and Kim, which was unfortunate. Our hard-as, extremely understanding Mixed team were left without transport back from a hot stage 2 – crappy and avoidable. But you’d not know it for the spirit in which these legends rode their hearts out – we’re so sorry SPR Mixed!!!

Of SPR the volunteers that we had with the teams, there were some huge standout efforts.

Bryan “Poodle” Thurstan, on 2 days’ notice and nursing an almighty Melbourne Cup hangover, answered the call to step up to be SPR Team Manager. In an effort to replace Stuart Gee who was forced to withdraw after his nasty crash just days out, Jon Hanson was the ONLY person with time available (he was already travelling as Team Manager) and race fit to step in – and we tried EVERYONE. Taking over at such late notice required a solid handover (handover, not hangover, this time) from Jon, which with his exceptional planning was a doddle.

Michelle Bonner. Wow. On Day 2 Michelle clocked up approximately 600km of driving picking up the slack for vehicle transfers from the start to the finish line – a point to point stage. Legend.

Cathi Dixon, who was a ToMR Event volunteer this year, drove from her accommodation in Nannup to SPR digs in Dunsborough both Friday and Saturday nights to provide SPR racers with massages. And get a free feed, apparently! Good Karma.

Of course, the SPR Slave Labour – Fiona and Andrew Williams. We pawned them out as ToMR Event staff with the SPR Van (it LIVES AGAIN!) in return for Annemiek. You two, Dear Williamseseses, are one of the major reasons we were graced with AvV and Kim for the weekend, and this can never be thanked enough. The Williamseseses even claimed that they enjoyed themselves being immersed in the event as staff. Maybe they just took note of the state of us racers and thought “hell no”. Whatever the fact, thank you, thank you, thank you.

And lastly, Jon Hanson. Passionate, diligent, generous, hilarious. Mate, this year wouldn’t have happened without you. Staging The Beverley and then ToMR takes a lot of time and effort and without yours, we would have struggled. Identifying and recruiting 23 replacements alone (yep, twenty three…..) to cover withdrawals is no easy feat. Despite the circumstances around your late nomination, I’m glad I got to race with you. If we weren’t drinking coffee from the Rocket, marveling at the effortless charm of The Crumpet, or coordinating transport and people, then we were laughing at the expense of each other or calling #FTS. I raise a Fairbrossen to you!

Over the next few days we will publish SPR Team Members accounts for each of the four stages to give you the inside line on how ToMR 2017 went down. No doubt you’ve possibly stumbled across an image or two from the event. We’ll collate all that we can and post them up in a gallery. Please be mindful of the rights and ownership of any images before posting and sharing. Do the right thing by the snappers that give their time to capture us in all out glory.

One thought on “Tour of Margaret River 2017 – Squad Report”