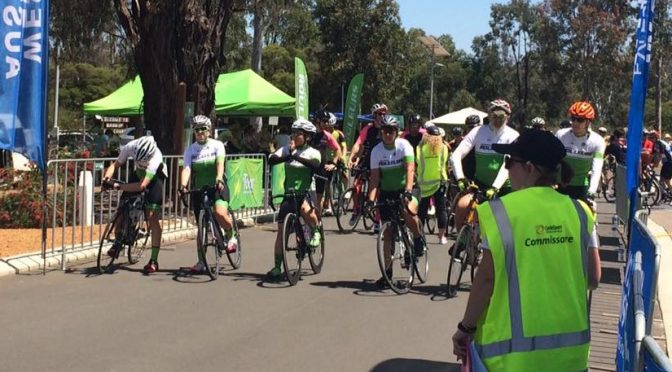 So I’m back from the 2017 Satalyst Tour of Margaret River, my first ever stage race event and I’m feeling a strange mix of feelings. There’s more than a healthy dose of fatigue, having driven back first thing in the morning and with around 200kms of racing completed over the three day, four stage event. But the overwhelming feeling is of withdrawal – I want to be back there, enjoying the experience of working as a team on (and off) the bike. I want to be back amongst that SPR comradarie, that almost family kinship.

I’m addicted to the social feeds, trawling through photo after photo, post after post of people capturing the moment in many diverse and personal voices. Greg’s email informing me that I’ve been nominated to capture a race report on behalf of the mixed team arrives a bit unexpectedly. I feel honoured …but nervous; I hope I’m up to the task and can capture a little insight to our shared experience in the SPR Mixed team.

I think it’s fair to say that Stage 1 was an experience for all of us. None of us had done ToMR before, and although prior to the start we all had some racing experience, for a lot of our team this was a relatively recent development and for the most part, we are still relative newbies! So a multi-stage event with a huge roster of competitive teams, not to mention a healthy spattering of pro tour riders, was a little daunting to say the least! Let alone the concerns about the physical dimensions of the race itself; the undulations of those team time trials, the length and gradient of some of those climbs on Stage 2 and 3, and the cumulative distance over 4 stages…. how would our bodies hold up?

And so, our Tour actually started the night before. After we had checked into our lovely beach shack at Dunsborough, unpacked our bags and got dinner out of the way, we gathered around Shane’s Surface Pro on the breakfast bar to watch the YouTube’s and take in some time trial tips from 7x world champion Marianne Vos. We studied the stage profile charts for the millionth time, talked tactics and positioning. Tea spoons came out – models of our paceline were debated. We were so pro!

We woke early Friday morning to take in some breakfast, finalise our packing and make our way in convoy to the tour village at Nannup. The SPR tent was directly adjacent to the start line, with plenty of familiar faces around – volunteers and riders alike – helping to calm the nerves a little, people pinning on numbers, warming up on trainers and getting into the zone. It was fantastic to be immersed in that feeling of support; little words of encouragement here and there, along with the freedom that comes from being surrounded by a whole group of people each approaching the countdown to the start in their own personal, focussed way.

With our race prep and warmup out of the way, we made our way to the starting line for Stage 1 – a 42 km Team Time Trial along an undulating out-and-back course along Mowen Road from Nannup. We posed for a few happy snaps, then lined up on the starting line as the countdown rolled down… then we were off! The stage commenced with a steady roll out through town, with Cap’n Deb on the front, then we crossed the bridge out of town and hit the first of many little hills of the day.

Anyone who raced will tell you it was an intensely hot day, possibly exacerbated by the late arrival of spring and us all being used to the cold, but even in an objective sense it was pretty warm out there…. Figures have been debated… it was probably 38° or 39°c, but my Wahoo bolt says it was 40°+ probably reflecting the heat coming off the tarmac.

The stage was quite an undulating course. None of the hills were individually tough, but you were either going up or down for most of the stage. In our debriefing with other teams after the stage, we began to learn that it wasn’t just us; it was tough for all teams to keep the paceline tight… One minute we were on each other’s wheel in a nice, tight formation. The next we were inadvertently creating multi-bike length gaps and dropping riders. Luckily, we kept up pretty good communication between everyone in the team, with plenty of “ease up!”, “faster!” and “steady!” calls helping us correct the inevitable breaking up of our bunch. It may not have been as smooth as the spoons, but it felt pretty good!

And so the kms ticked away. There was such a great atmosphere out on the road, especially as the green and white flashed by us, with plenty of “Go SPR!” being called out, to us and from us to other SPR teams. There was a tremendous feeling of comradarie amongst the entire SPR squad that wrung that extra little bit of effort out of our legs. The halfway turnaround point brought a surprising but very welcome light breeze which seemed to help us lift a little bit more.

By this point, the heat was starting to take its toll. We started to regroup and consider the options that we knew would come into play at this point…. the team time and points would be set from the time of our first 5 across the line. Should we push on hard and let one of us drop off at this point? Wisely, we stuck to our Plan A; we were going to finish this as a team of 6. And so it was, those that were feeling good did longer stints on the front, with someone rotating to act as a backstop and help keep the communication up. We kept it together and powered down the final straight in line, as per our race plan, crossing elatedly under the arch as a team.

There was a brief window where the results on metarace showed us netting 3 points in J division, only to lose them when I & J div were later merged! But that was of no consequence to us; we had completed Stage 1 and had ridden well, we were placed in the right division for us and we finished as a team – what more was there to ask for! Perhaps a massage, some dinner and a lie down? After all we had the lumpy Stage 2 road race ahead of us on Saturday!