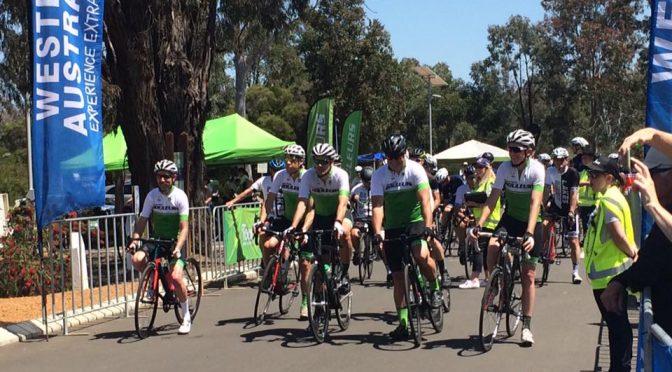 I love a good road race and Stage 2 of TOMR was the best stage of the event to suit my abilities. 50 ks from Nannup to Greenbushes. I was looking forward to it. 9am start. Drive from Dunsborough wondering what the day is going to be like.

The day started hot and got hotter. Warm up with a few hill climbs around town to get the lungs hurting and the legs over their initial soreness.  The atmosphere at the SPR tents at Nannup was fantastic. Some on rollers. Ice. Bananas. It was all set up for us. Thank God for our vollies. All we had to do was ride our hearts out.

We lined up with the rest of D Grade that the Mens 2 team were in after our TTT result which put us slap bang in the middle of D. 3,2,1 on the SPR countdown clock and we were off. And we were lead out down the main street of Nannup by a motorcycle escort to the bottom of the climb.

The Mo, The Prez, The Crumpet, Tim, Ross and myself lined up behind the RTR team and just arrived at the bottom of the climb when “Bang” someone’s tyre blew. It was the RTR guy and he pulled off and rode back into town to change his tyre. But we had more important things to do. The climb was on. For the first few minutes everyone tapped away but as it got steeper the young and the strong started to take off.

Callum came round for Feathers and Scales. An RTR guy went then they came past in groups of two and threes. I was doing all I could but I couldn’t hold these strong men. But wait here comes Crumpy flying the flag for SPR. He’s not just the thinking woman’s crumpet he can also climb a hill. All that Zwift sweat over a hot computer was paying off. It was high point of my day just seeing him go with off with the leaders. We were never to see him again.

But for the rest of us it was just hard work. Later I saw that I’d got PBs for 5 minute and 10 minute power on that climb. Other riders I’ve spoken to got the same. So it was on for young and old.

Wattlab riding erratically as they do on our Sunday Hills rides. Joey Rawson eventually making up for a disastrous climb and riding away from us. A long brown snake starts heading across the road and we go to ride behind it then it changes its mind and we hurriedly change direction to let it slide away. Luckily we had the legs to get away from those who just wanted to sit on and do nothing.

It was scenic. Tall timbers. Creeks. Cows in pasture.But there was no time for looking around. There was work to be done. So we caught people and dropped people. We ate. We drank. We turned those pedals over. We climbed and we fell.

And we worked our way to the Kandalee Catapult – the last climb of the day.  This was made bearable by the Crikey Cadel Croc which had stationed himself at the top of the climb and was blowing his trumpet all the way up.

The Mo is a great photo bomber and his impetus for getting up the climb was to be first in Beardy McBeard’s shot of our group – a task he succeeded at. After that his day was done. Mission accomplished for The Mo.

Finally we were at the top and it flattened off again. Look around. Regroup. Work with the riders you are with. It was The Mo and I, Merv from West Coast Masters, a C Grade guy from En Time and a couple of others. We each took our turns though we were weary now.

I’d been criticising the organisers in the morning for giving us a 50K race when they could have given us a 100K loop that finished back in Nannup. I was eating those words as fast as I could now.

Merv blew first and disappeared. En Time kept rolling around. The guy in front of The Mo lost the wheel and that was The Mo gone.  En Time was riding away up the last climb. I let him go.

1km to the KOM said the sign and we all scoffed.

500m to the sprint said the sign and we laughed out loud. We had nothing.

Up over the top and it was a roll down into town – a sharp right hander and there was the finish chute. Down in the drops so the coach doesn’t get upset and over the line.

It’s sweltering as I catch up to Ross and The Crumpet who are parked in some shade. Catch my breath then off to find the SPR tent. There it is – an oasis. Shade under a tree, an esky full of cold cokes – the volunteers have saved our lives again.

Watch the other SPR riders finish and give them a cheer as they pass. Take off your shoes and buy a $5 burger with some money Tim lent me. A minutes silence as it’s remembrance day. Stand up for Advance Australia Fair. Help those who need an ice tube or a cold coke. Chat about the race.

Check our mate with the oxygen mask on who’d overexerted herself. Listen to Robbie McEwen and Matt Keenan and Gary Suckling chatting on the microphones about the finishers. Watch the WM3 team from the Netherlands as they finish as though it’s all been an easy stroll in the park.

The volunteers have been shuffling cars all day to try and get all 42 of us home.

It’s a slow job but they’ve done brilliantly. Eventually our lift arrives though it’s not without some trepidation that we leave as we can see there are still SPR riders who won’t get home till 5.

On the ride home we pass numerous groups of racers riding the hilly 50K route home. We can’t quite believe the sight.

We got home to Dunsborough for a quick dip and see that we’ve moved into last place in Group D. A position we proudly hold till the end. Rossco cooks up some chicken for dinner. The Mo fires up the coffee machine. We have a Little Dove and wind down.

It’s been a brilliant day. Everything I hoped for.