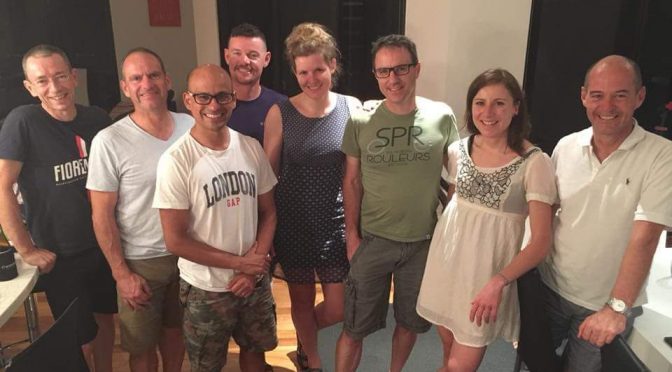 For the Mens 3 team (Dave Menarry, Dan Harvey, Ray Martin, Mark Tancell, Liam Donley, Rosemary Reid and Craig Duarte), Stage 3 really began at the dinner table the night before the actual stage itself, where we were discussing team tactics.

It was at roughly that point when Dan received an email from the Womens 1 team informing us of their reconnaissance drive of the Stage 3 finish – “its worse than the write up, 12% average, peaking at 20%, oh no, world is coming to an end”.

Panic began to set in.  We don’t like hills, and by that logic we don’t like climbing walls either.  Being a scientific lot, we set about implementing our “friction reduction” plans – clean chains, clean bikes, pump tires, etc – anything to make the stage end “easier”.

I focused on “fuelling the machine” by eating leftovers from a couple of days earlier, ordering Connoisseur Cookies and Cream ice cream (thanks again Rosemary for picking this up) and sucking down beetroot juice – my potent food combo for any effort the next day.

Dinner was then had, followed by an early night given the 5.30am departure time the next day.  I am pretty sure we all had an uneasy sleep thanks to the Womens 1 email.

I noted that some of the team (Liam, Ray and Dave) really liked a structured and quiet warm up on trainers, whilst Mark and I preferred a short chatty ride out and back.  Mark enjoyed telling his story (repeatedly) of how he rode with Luke Durbridge to close a gap between groups on the previous stage.  He also said “he took him on the hill” – whatever that means – so ask him about that at coffee next time.

From my perspective the start seemed to go okay, with a gentle uphill to the first climb.  Dave had a little more work to do having to manage a mechanical on the start line, and then solo TT back to the group.  We both stuck with the main peloton over the first climb and settled in for the long haul to the wall at the end.

Fatigue from the previous days racing was setting in and Liam, Ray and Dan became separated from Dave and me on the first climb.  They thankfully elected “to catch the Durbo-express” to bridge back into the game a short while later.

At this point I must point out that I used tubeless tires for this event – yeah – that’s right.  On the previous 2 stages I had a flat post the stage being completed, however the goo sealed the leak easily.  Mark had taken notice of this and was now asking for $1 each time I pinched my tire to ensure it was inflated – I think I owe him quite a bit as a result.

As Murphy’s Law would have it, Mark had 3 flats on the stage with his clinchers!  Tubeless 1, Clinchers 0, but who’s keeping score? Give tubeless a try is what I say.  Kudos to Mark though for carrying so many inner tubes, persisting with the change outs, and then soloing to the finish!

As for peloton riding – this was the first time I have ridden in a group of say 30-40 people.  I was somewhat nervous of this when I signed up for the tour and I did lose a little sleep over this issue in the run in to the event.  However, once you are going, the fear disappears as you realise you are riding with other capable riders.  For the future SPR TOMR riders who are worried about this aspect, I would say not to let this hold you back – it’s a mental thing.

Riding is mental.  You need to confront your fears to overcome them.

The goings on at the bottom of the final climb cannot be logically explained, lest to say the Womens 1 recon email from the previous day reached other non-SPR riders and fully psyched them out.  What sticks in my memory was that as we came to the climb, some riders put on the brakes, got off their bikes and elected to walk up the climb. WHAT THE …?

Mens 3 smashed that climb – simple as that.  I cannot remember the pain.  Ray was described as climbing “Contador-style!”  We all looked like we were suffering less than the other non-SPR riders, which was a good thing.  We weren’t the weakest there, and were stronger mentally than many.

The moral: Don’t overthink things as you will come to a standstill.  Spend that energy pushing on up the hill.

This was one of the standout moments from the stage – Liam gave up his bike to Bec just prior to the Stage 4 TTT back to Nannup and rode Jordan’s bike instead.  This exchange required the quick mechanical skills of Andrew Williams to swap cranks, seat posts and other bits of kit.  Amazing teamwork and commitment to the cause to get a fellow rider back into the game.

What a great bunch of guys – different abilities, quirks and ways of doing things -all coming together as a team and succeeding was an awesome experience.  To take out 3rd on the first TTT was a highlight.  Also, special thanks to Rosemary, who made sure we were all taken care of – it would not have been as successful without her support.  Again, well done to all, and hopefully we’ll do it all again soon.