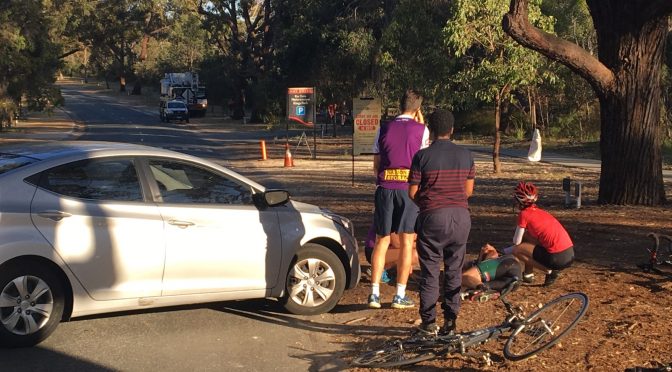 Just to break up the happy happy news from ToMR this year lies a story from Stuart Gee of a near miss in competing at this year’s Tour, but a direct hit into the side of small sedan. Over to Stuart…..

I was very much looking forward to the upcoming summer season of cycling. The Tour of Margaret River (ToMR) was just a few days away, followed by ATTA’s series of time trial events headed by my favourite, Brookton Highway ‘Hilly’ 49 km TT. But first, Tuesday’s ride in King’s Park. The day began well enough, catching up with ToMR team mate Mark De Castro on the bikepath at South Perth as he also headed to the park for his group training session.

Kings Park is one of my favourite places in Perth to run/ride and since 1977 when I began running there I have done countless kilometres along the many tracks and roads that weave their way through the bushland. As I neared the completion of my third lap around Lovekin Drive/May Drive a car suddenly attempted a U-turn right in front of me, and I knew the day was not going to end well. I yelled “NOOOO’” as I slammed into the driver side of the car. 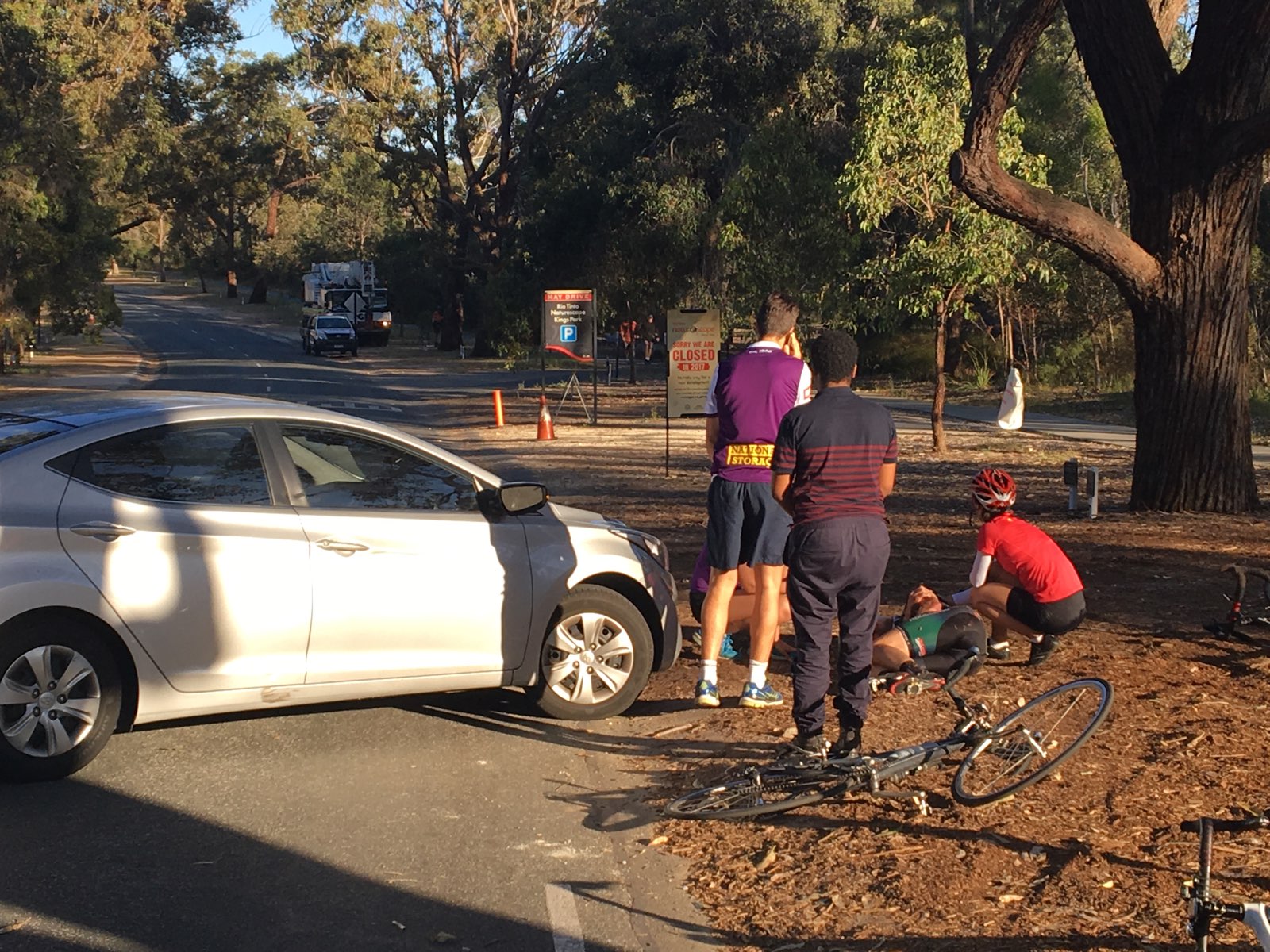 Prone on the ground, I was angry, very sore and did not want to move. Somebody said to relax and that they had called for an ambulance, which arrived soon, I think. The paramedics checked for serious injury (neck, back and head) but none seemed evident. Before the painful loading onto the stretcher I was able to phone Yvonne to let her know what had happened, and exchange phone numbers with a witness. My bike (damage unknown) was taken away for safe keeping by the park ranger. I

Fortunately, Sir Charles Gairdner Hospital (aka Charlies) is adjacent to the Park and so after about a dozen X‑rays and two sets of CT scans, confirming six broken ribs and fractured scapula, I found myself dosed up in ward G62. I can’t say there were many humorous moments during the whole process, but the remark by one of the nurses upon seeing the amount of dirt, bark and leaves on my clothing and stretcher that there can’t be much bush left in Kings Park brought a smile to my bloodied face. Apparently after colliding with the car I ‘face-planted’ on the somewhat softer road verge. 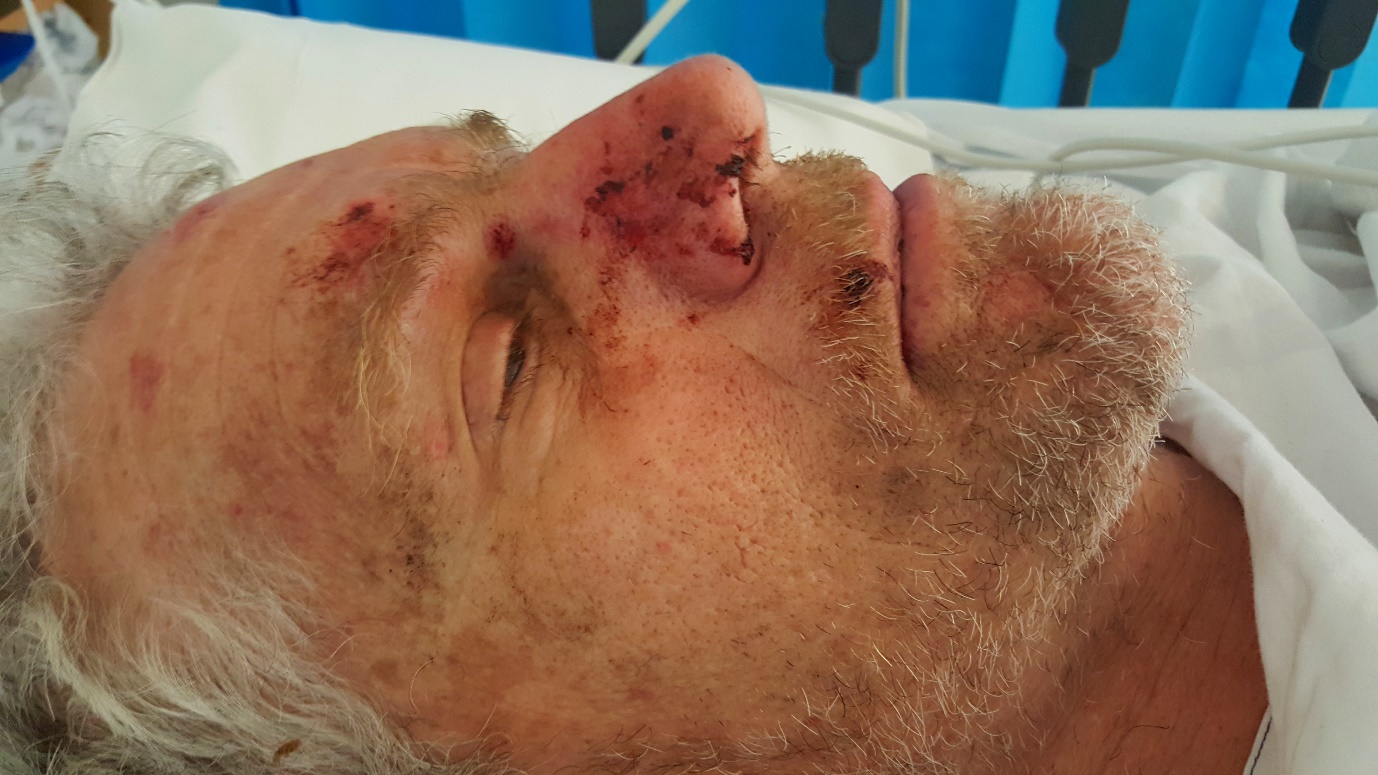 At 11:20pm that night I was awoken by the resident orthopaedic surgeon to give me an update on my injuries, and options for recovery: either choose surgery the following day for which a decision was required early next morning, or allow the fractured scapula to heal without intervention. I favoured the surgery option despite the associated risks and after discussion with doctor friends and family, that’s the option I chose. Fasting needed to commence immediately because the actual time of surgery was uncertain and could be ‘any time’ the next day. As it turned out, fasting lasted over 20 hours until ‘anytime’ 3:30pm. After surgery, I woke at about 5:30pm to learn that the procedure to install two plates in my shoulder and clean-up the damaged ligaments went well, and I was soon transferred back to my ward.

The following two days in hospital were filled with ’obs’, reading, sleeping, responding to many messages of goodwill, and medicating. It was impressed upon me many times by the staff at Charlies that pain must be 100% managed so as to be able to breathe deeply and cough, so that the risk of contracting pneumonia is minimised. Message received! Even so, I dreaded a sneeze or big cough which would certainly score 10/10 on the pain scale!

The discharge process on Friday afternoon was welcome and painless, and the bag of medications for the forthcoming two weeks homestay was impressively large. It needs to be mentioned that although there is much talk of cost-cutting, turmoil and unhappiness in WA’s health sector, the service I received through the whole incident was absolutely brilliant.

The first weekend recovering at home was largely spent reading and wondering how SPR M1 team mates Andrew Lilley, Elar Kaldar, John Carnicelli, Andrew Ballam, Mark De Castro and Craig Denham were faring in the ToMR at Nannup. I’m not sure who was in the least pain over the race days, but I certainly know where I wish I was! Our team practice sessions suggested we were a well-knit team with good prospects of going more than OK, but it was the actual riding and ‘team’ experience that I was most looking forward to. It had been many years since I had last ridden the tour – I last did it when the format consisted of quiz night and handicap points for age, maybe just maybe contributing to the success we had then.

Well, ToMR Tour has come and gone, likewise lawyers and police crash investigation, and I still have another week at home. Son Brendan returned my beloved old Cervelo R3 framed bike on Sunday (12th). Inspection revealed rear derailleur/hanger damage and minor scrapes and scratches – no surprises there. More serious though is a fractured left chain-stay which will likely cause the frame to be ‘written off’. Formal assessment for other damage and cracks is yet to be done, but needless to say I’m looking for a replacement frame/bike! Hopefully, I will be on the trainer soon and back on the road before Christmas. Sadly , the TT season is now shot to bits!

Thank you to the many get-well wishes and helpers, without whom my recovery would be significantly more arduous.