SPR are probably sick of King KOM at the moment so other than saying that BMC were impressed with the kit this was not about King KOM. It was about finishing an event rather than racing a race. This mentality common to long distance triathlon has always perplexed me, and it was not until after the Taiwan KOM (TK) this become clear. 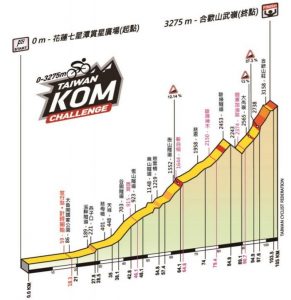 The numbers were simple: sea level to ~3200m in 80km with total elevation ~3700m and sections up to 27%. Coaching would be required.  The responsibility landed on Pete and Toby – and at the initial meeting we discussed training schedules whilst working FIFO. Easy right? Pete and Toby’s initial reaction remains a humorous memory for me.  It was a WTF mixed with are you serious? Sucks to be the coach eh? Hahahah! But as always the coach has the last laugh. Wind trainer sessions at the end of a long day were not always welcomed and work swings became a blur. Eat, work, train, eat, sleep, repeat – is that a song? The mining crew gave me a wide berth as they struggled to interpret the strange sounds that were emanating from my donga, but to be fair if I’d never heard Sufferfest before I would have agreed with Dogga and Belter that I was queer AF. The off swing breaks were much more favourable with long hours in the hills, Ewen St repeats and MTB trails accumulating 1200 TSS a week. 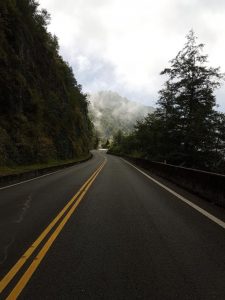 Nerves (I realised weeks later) arrived the day before race day. Nibali, Cadel, the Cookie Monster (Phil Gaimon) and the media combined to create a fanfare that put me on edge. That and the guys from the previous year telling me repeatedly not to go too hard too early and horror stories of cramps and riders pushing their bikes up the steep sections of the last 10km. Oh and a cutoff time of 6.5 hours… surely I’d make it, right? Stupid nerves.

As the road began to ascend I initially attempted to stick with the front group (after the pros) but my FTP was already at 120% and many were pulling away. I just stuck with Toby’s words – “keep to 75-80% FTP and you’ll be fine”. My focus, often lacking on riding adventures, was eating. The night before I’d hit up the local store and scavenged a truck load of mystery pastries – every mouthful was a surprise – good or bad it didn’t matter.  The food focus was broken by Stephen. Steve-0 is a Pommy English teacher/part time runner who doesnt own cycling shoes, just some crappy runners and unfortunately coloured brown knicks. I’d met Steve at the welcoming ceremony earlier and greeted him with surprise as everybody else looked as though they’d come from a Friday morning VCC ride. “Those shoes hurt my knees” he said with a large grin. I’ll ride with this guy for a while… 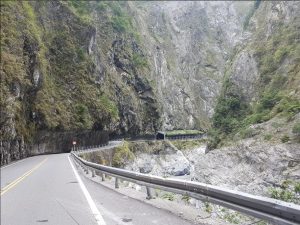 Anyway, time to burn Steve and his sandshoes at the next aid station. Water and bananas. That’s all I remember. And lots of Taiwanese chanting “Fight” – at least that’s what I thought they were saying.  Transitions have always been my specialty and I was in and out like a pro. Watching Steve drop his water bottle I heard him say “I can’t drink whilst riding uphill…”. After that middle aid station I began to catch riders which in turn provided more targets up the hill to chase down. Just as I thought I’d be closing in on Nibali I hear; “Andy I finally caught you!”. Bloody Steve-o had chased me down after his 10 minute aid station debacle. My annoyance quickly subsided as we rode together taking down riders in front of us. Every person we passed, and I mean every single one of them, would just stare at Steve-o, his poo-brown knicks and daggy runners. I started to really enjoy myself and together we continued up the hill. 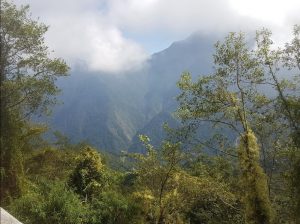 It was not until the last 10ks (10km with 1200m elevation) that Steve-o dropped off – the gearing on his rental bike was not favourable for hills.. IKR! The 27% section was a series of 3 switchbacks and although tough, not the wall that everybody goes on about. It was after this point that I saw riders beside the road pushing their bikes and crampers. Lots of crampers. The TK was taking its toll, but feeling better than expect I scoffed at those who had obviously gone too hard too early. My second best friend Karma (after Steve-o), then popped by and the cramps began. With 4kms to go and some serious uphill remaining I wondered how long it would be till I succumbed and had to push my bike uphill. My saviour appeared as rider #279 – my Japanese guardian angel – materialised from nowhere and without prompting pulled a red bull from his jersey pocket and handed it to me. It got me through. The finish line was a blur. I remember eating, getting a medal and a massive headache.  Although it was probably dehydration I’m calling it altitude sickness and it didn’t subside until we returned to sea level. Happily I finished the Taiwan KOM in 5 hours easily avoiding the dreaded 6.5hr cutoff – as did Steve. We had completed the Taiwan KOM. 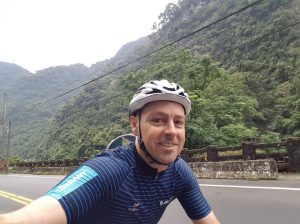 The event is well run and many people return year on year – it seems like a bit of club, but not cliquey. The cost and travel logistics are reasonable and straight forward if planned in advance. It is by far the most spectacular scenery I have encountered in any bike race. An epic canyon through a marble gorge with long dark tunnels, cliffs, temples, rainforest, drop-offs, rivers, waterfalls, majestic vistas, mountain clouds and monkey poo covered roads. I could go on.. Anybody interested in this event I’m more than happy to chat (over coffee or beer) and give any insight I can. GCN (who I met at the after party) also do a pretty good summary: https://www.youtube.com/watch?v=Sxfd2xzlM6k