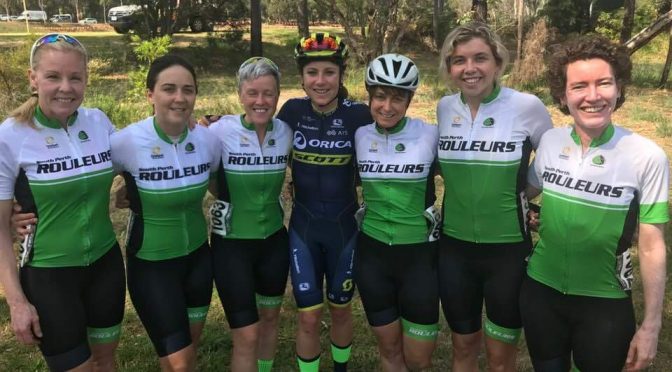 As my team rolled into the start grid for stage four of the Tour of Margaret River, it was a miracle we were all there. Our cracking third stage was not without its casualties – Kate Bonner and Rebecca Kelly were both taken out of the race after spectacular crash about 14km in.

But stellar performances from Ali Ramm, Leigh Outschoorn and Katheryn Dines on the final climb of stage three (with me lugging myself up just behind them) saw our team win the stage. This left us just two points behind the leaders Busselton Cycle Club and two points ahead of Veris Womens Development going into stage four.

We were hungry for a win, and we knew our chances would be greatly diminished without a full squad.

The SPR community was in full force during the short break between our third and fourth stage to get us all on the road for our final team time trial.

SPR stalwarts Daniel Harvey, Andrew and Fiona Williams and Mike Masden made it their mission to find a solution and SPR Women’s 1 ring-in Stef van Amerongen came through with her mechanics skills.

Liam Donley didn’t hesitate to lend Rebecca Kelly his bike, despite the fact he had his own time trial to race with SPR Men’s 3 (which he did on Jordan Brock’s bike, kindly donated for Annemiek Van Vleuten’s friend Kim).

Kate Bonner’s bike had more than a few things wrong with it after it hit the deck at 30km/h – a broken front rim, cracked crank, misaligned gears and bent bars. None other than the WM3 Pro Cycling Team mechanic managed to get Kate’s bike close to roadworthy. With a few parts from the pro Dutch team’s van and from Rebecca’s half-broken bike Kate was ready to race.

If we had learnt anything from our countless team time trial practices in the lead up to TOMR and on stage one, it was communication is the key to a good TTT.

With three days of hard racing and over 160km in our legs, we agreed to warm up on the first 10km and wind it up from there. Our star time trialist Ali Ramm led us out up the first hill and we followed on with short and sharp turns, with the occasional extended effort from our star climber Kate Bonner.

Each team member lifted to put in their best performances and with continual calling of ‘up’ and ‘down’ we were able to maintain a solid pace during the undulating stage.

About halfway in we realised the saddle bag on Rebecca’s (well, Liam’s) bike was hanging off the frame dangerously close to the rear tyre, so we came to a standstill to quickly rectify that.

Kate Bonner was our first to pop about 32km in, with broken gears making the journey too frustrating. We powered on and into the last 10km of the race Katheryn Dines had turned herself inside out one too many times and dropped off the back.

The four remaining riders, we put our heads down and focused on the task at hand – getting to Nannup as fast as possible and finishing an extremely taxing three days. Leigh, Ali, Rebecca and I gunned it around the last corner and over the finish line at Nannup to be greeted by several cheering SPR club members.

As we waited for our team members to cross the line we were filled with emotion and exhaustion.

We didn’t find out the result until at least an hour later at the presentations. Sadly, Veris had a super fast time trial (despite being one woman down) and had taken out the win. Our time was one minute slower than Veris’ and one minute ahead of Busselton Cycle Club’s.

We finished the TOMR in second place by just one point, but with the knowledge we had given it our all. We are all extremely grateful for the SPR spirit which shone brightly during TOMR and we would like to say a huge thank you to our team volunteer Michelle Bonner.