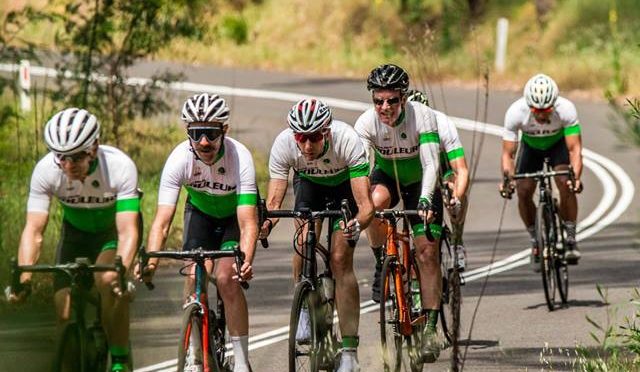 A Race Report of stages, and of men in average mediocrity.

So. Men’s 2. Until the Tuesday before Friday race-day we were yet to finalise our team. An unfortunate and serious Saturday F2 crash took out powerhouse DeCastro only days before and left us searching. We found JJ and the rest was to become history. Pre-race day, several of us headed to Kirup to allow Jens Voigt to have a spin with SPR M2. Jensie, ever the character, was in fine form. Barely off flights from a worsening European winter, he managed to avoid all the usual WA summer pitfalls – sunburn, flies in the mouth, spray of cow pat from the wheel ahead, bourbon-and-bush-chook-swillin’-ute-drivin’ bumpkins stingin’ to bounce a cyclist off the roo bar – avoided it ALL. Espresso time.

Off to Nannup for the team rego, we caught up with our SW Faves – Brendon Morrison and Bec Cotton. South West Cycling royalty. The Gods. Teams registered, numbers and transponders in hand, we headed to our Busso digs for the campaign. Starting with a lovely local sports drink of choice and a Ralpha-prepared spaghetti bol, full bellies made for good sleeps.

Stage 1 TTT saw us arrive at the Balingup start line without a TTT session with all members under the belt. No sweats. It was set out by Road Captain Ralpha what was what. 4watts/kg on the front, talk it up, no f*$king heroes. Call it when you’re struggling, longer turns if you’re not. The stage was rolling, and being mostly shaded saw us avoid the worst of the heat and look better for any photo opportunities.

Poorly though, Mo was off colour and missed every snapper – looking down and not posing, looking left at the driver instead of right at the snapper. It all went pear shaped. Photo fails aside, we finished middle order of the middle group – E grade. Mediocrity gold, and right where we belonged. Five points – thank you very much. Head home to Busso, dig into a JJ-prepared red chicken curry, local recovery sports drink of choice and sleeps.

Early rise for the Stage 2 road race. As it was last year, a 52km, split by division road race going straight up. Then rolling, then down, hard left and then up, up and up again. Mucho ouchies.

As Hanno does, having learnt from the best, he took to the road first, put in a 100m gap on the bunch and continued on with it………. through the neutral zone, until the base of said first “up”. That first up was a consistent wind up, speed gradually increasing the further into the climb and the steeper the gradient became. By the crest, Ralpha was of with the lead group, JJ and Jedsman barely a few metres off, and Mo was 300m back by the time he crested.

I can make it. I can catch them. Head down, elbows flat, TT time baby. Over the next 3-4 km I hit flat power and got back to the boys in green, inadvertently dragging another 7 or 8 behind. Who waiting until I’d caught on to have a think about contributing – classy!

Without legs to go all the way, to work I went, rolling turns while JJ and Jeds took in the sights of Nannup’s beautiful green country side…… waiting. Lovely this time of year, apparently. Cresting Kandlee Hill – the sight of the most majestic of photos from last year’s race – there was Zac, camera in hand waving to the Mo. Tick.

Hill crested, Jeds still visible up ahead, we still needed backups in case anything happened to Ralpha. JJ is gone. Must keep going. Final drag to Greenbushes saw an obstacle course of many blown legs and spirits. Kicking over the final crest, finish line merely a right turn away, 1km to go, 500m to go, TIME TO GO! With nothing on the line other than another photo op, it’s a case of “look fast, not go fast”. Camera – tick! Coke, food, water, change, burger, cake, ice cream.

We drive home to Busso with the now traditional Ralpha-small-bladder stop and then take in a local sports drink of choice and Mo’s Cooking Show. Chicken drummies with thyme, garlic and lemon coupled with roast veg. I know, right?

Stage 3 start is relaxed despite us all knowing the next 109km will be tough. Rolling to the start line, Zac is in the Start chute – in the drops, out of saddle, cheeky grin, snap. Tick!

The stage saw points for your first rider, but MORE points for your fourth rider to finish. Finishing with four together was imperative. It is on. On the line awaiting the start Bec Cotton gives us a hug, wishes us the best and Mo leads out through the neutral zone. And then the next 4 km. Seriously – someone? Racing begins in earnest at the 25km mark with some firing off the front. And we never saw them again. Official ToMR (And Beverley) event snapper Daniela Tomassi drove past, hanging out a sunroof, camera in hand. Mo gets a nod and poses. Tick! Day 3 is going well.

Attack. Arrest. Attack. Arrest. This was the next 50km. More ouchiness. With 75km in, SPR M2 was still all together. Approaching the next turn, it was time to share some wisdom in getting “The Money Shot” with the bunch. Get in the drops – no question. Look fast, don’t go fast. Give a grin. Always have a moustache. The bunch nodded, astonished by the wisdom they had been bestowed. Tick!

35km to go, Jeremy-O shot off the front on an all or nothing attack. Ham. Mer. Down. And down it stayed. One followed, many looked at each other. Away indeed, with 15km of chasing from the bunch done,  Ralpha jumped in an attempt to bridge, and he did. That’s 2 up.

Ralpha and several others got on with it. SPR M2 are still 6 – Rouleur Strong. Surges and moves continued before a lull and a hush came over. Mo time is Go time. To the front, feeling like the legs had some, we wound it up. The goal – roll hard, get a few un-necessaries off the back and ensure we keep our fourth up the front. Go, swing off, go again, swing off. Shrapnel flying as the pace stayed up.

Winding up for the final right turn, I picked up 10 or so places in the finish straight and was our 4th rider across the line, hence securing points for 5th place for the team in Division. The team finished with 5 riders in the bunch, and one a smidge further back having emptied the tank for the team earlier. Together ’til the end.

Hanno, Ralpha, Jedsman, J-O, JJ and Mo. SPR M2, ToMR 2018. Fifth place, in Division E – embodying everything of average mediocrity. Six middle aged guys leaving everything on the road, having an absolute ball, and telling some tall-ass stories for the coming months, for sure.