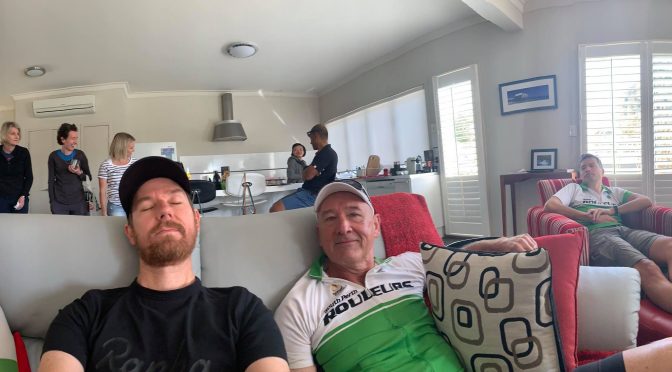 A South West rampage in the words of Poodle………

There are only two types of cyclists.  Sprinters & climbers.  You can see the difference a mile away.  Sprinters have guns.  Climbers have chicken legs.  Sprinters come first.  And the SPR Men’s 3 United Nations Team was all about being first.  No chicken legs here.   Australia, Italy, South Africa & the UK all represented.  The Prez, Poods, Barry, Andrea the Strong, Dermot & Ash, known collectively as BAD-Ash.  Race day kicked off with pre-race team briefing at the W2 house.  M3 in first, sprawled over the lounges keeping things chilled.  First to be cool.

The TTT saw M3 away first.  The team kept it tight, nailing the first cameraman at 500m in a move that even The Mo coveted.  The rolling climbs & descents quickly took their toll on all teams, with M3 passing six other teams by half way.  Dermot screamed “AAARRRGGGGHHH” which was the team sign to cut the 6th rider & pick up the pace.  The speed increased, the weather got hotter, Poodle sweated even more.  The Hand of God (aka Andrea the Strong) pushed Poods over the last climb.  Andrea will never wash that hand again.

Day 2 would be for the climbers.  It would all blow to pieces early on that first hill.  Team plan – be at the front for the start!!  The UN Team started well, getting the first selfie of the day with Jens Voigt.  Now it was show time.  The team stuck to orders, pushing all other riders out of the way to be first on the start grid.  Dermot shoved three Midland riders to the ground.  Ashley coughed phlegm all over the start marshal.  The Prez made a Black Swan rider cry.  Best start photos ever.  M3 led the massive field out of town & up the first climb.  The field strung out & riders from the earlier divisions started to appear.  The Prez put the hammer down.  Again & again he struck his blows.  Poodle became the sparks, and the rest of the field was the anvil.  The Prez & Poods rode away with the leaders, while BAD-Ash followed team orders & sat up for a cruisy groupetto ride.

The Prez kept Poods in touch up all the climbs.  The Prez was heard to say “I think I’ve broken the Poodle.  I think I’ve broken myself!”  Poods was calling it “I’m done for Prez, save yourself, go for the win!!!”  The Prez railed “I’m not leaving you Poods!!”  A Roues Chaudes rider heard the Prez’s voice cracking with emotion.  The duo were looking good until they were swamped by a bunch of wheel suckers at 1km from the finish.  But the pair still managed a beautiful finish, arms linked & held high like Hinault & Lemond at Alpe d’Huez in ’86.  Poods scored a DSQ for being overweight, another first for M3.

Day 3.  Could M3 produce the money shot?  The team led out on the front briefly, before letting all the other mugs do the work into the headwind.  BAD-Ash followed team orders, staying tucked in & sheltered from the headwind.  Freshest legs in the entire peloton.  We will need them later!  A few B-Grade ring-ins went off the front.  Let them go.  The Team sniggered at the odd plonker trying to make a break into the headwind.  They’ll be back.

Move up & be ready for the right turn into Sues Road.  Head wind becomes tail wind.  Full gas.  The Prez confidently led the fresh legs of BAD-Ash through the melee and the red shift.  Poods kept a loose cover at the back bringing back any worthy discards.  The climb at 60km saw the bunch thinned, like a grevillea branch through a mulcher.  BAD-Ash moved quickly up the climb, as we closed on the bunch in front.  Andrea the Strongsacrificed himself to keep the back end of M3 in the game.

The rolling grind home along Mowen Road had El Prez playing numbers games.  He has a mind like a planet, calculating the finishing numbers of our team versus the others, for the magical fourth place. Poods struggled to count to three.  Ash kept up the race signals, with a loud cough meaning GO!!  Barry covered all the moves up front.

The final climb & turn back into Nannup had the field of 40 now reduced to 15, including the 5 SPR riders.  Or was that 4 of us?  Nope we’re down to 3.  That last cough meant ease up.  The Prez went back for Dermot.  He would never quit!  Barry channelled the Prez’s anger to beat the Black Swan rider up front.  Poods caught nowhere in the middle was a free agent, delivered a gun-like explosive sprint to beat two women riders to the line.  Ash scored the coveted 4th place points.

A fine & noble finish.  And in another first for SPR, there was not a single #fts dummy spit from El Prez.  And the M3 UN Team were first into the post-race beer!