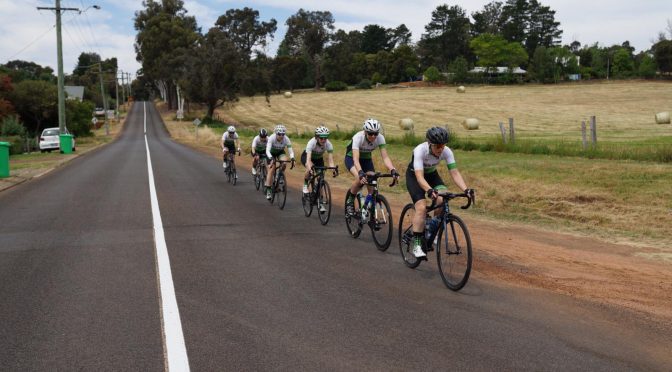 Stage 2, Kandalee Catapult. A fantastic near miss in the words of Abi Smeaton. Aka When a Triathlete takes on a Cycle Race….

Wahoo, great I survived Day 1 of the Team Time Trial, now for Day 2. I’m fully briefed on the team strategy “SPR Secret Weapon” – first wheel over the line gets the points so stick to the front of the bunch and when the ‘break’ is made jump on. I’ve got my nutrition on-board…in my bentobox which is apparently so not cool.

Right we’re off…following a car – what??!! Ok well at least I have a chance to work out this peloton thing while we are cruising at this nice easy pace. It’s definitely not a nice two-abreast ride with SPR, instead it’s a messy bunch of chicks on bikes where one second I’m following a wheel and the next its gone. Oh crap, I’m stuck on the left and people are passing on the right, hmmmm this is not what I was told to do (keep right and stay near the front) how to get out of this position? Thank goodness for my teamies who see my distress and tell me to move out in front of them. The car waves and the race starts. We start the climb and a couple of girls are off the front ahead of the bunch. I’m on a continual cycle of losing position moving back through the bunch then popping out and moving back up to the front. I’m nervous, sweating, and begin wishing I was up ahead with those two girls.

We continue climbing and the pace is pretty easy but I’m still yoyoing around. I’m moving up the front when I bump shoulders with Amanda – OMG what a newbie! Lucky she’s very cool about this but my cheeks are burning – so not cool. I’m part way back in the bunch when I see a few of girls surge off the front, I hesitate “Is this the break?”. Then I hear yelling from behind “Go go go” – is that for me? After what feels like ages I decide to go for it and get away from this bunch business. I surge forward ahead of the bunch and immediately regret my hesitation, those girls are a way up the road now. I settle in and push hard willing my legs to keep pumping, I’ve got to catch those girls. I pass someone dropping back to the bunch but the other two girls are still up there so I keep pushing.

Finally I catch my ‘break buddies’. One of them asks if we’re all willing to work together, I’m in but the other girl isn’t. Kirsty, my TT buddy and I set off with enthusiasm. We’re both delighted to be out of the bunch. Now to hold the rest of the girls off. We keep up a steady rhythm of a minute or so on the front and I keep looking over my shoulder expecting to see the bunch swallowing us up. I worry for the next 10km that I went too soon but little did I know the rest of the team was working to keep the bunch pace slow to let us get away. Finally, with only a few kms to go I see two K-division numbers up ahead. Kirsty tells me to go ahead, I’m strong on the hills and it doesn’t take long to catch one then the next. Dam I can’t shake her. We pass 500m to go and crest the final hill. She’s right behind me and I know her cornering and sprinting will be superior to my triathlete endurance.

We turn the corner and it’s a sprint finish, I can hear her just behind me. I’m ‘sprinting’ to the finish line pushing my bike infront of me like a jockey urging his horse to the line. I’m almost there when I see her wheel sneak in front. Third…I can live with that. I go to congratulate Serene but she can’t talk, I start thinking I didn’t try hard enough.

A few days later I see the photo. Talk about professional vs amateur. Oh, that’s what those curly bars are for…am I supposed to stand up? And why am I braking…too much speed or perhaps I’m getting ready for a flying dismount to start my run…