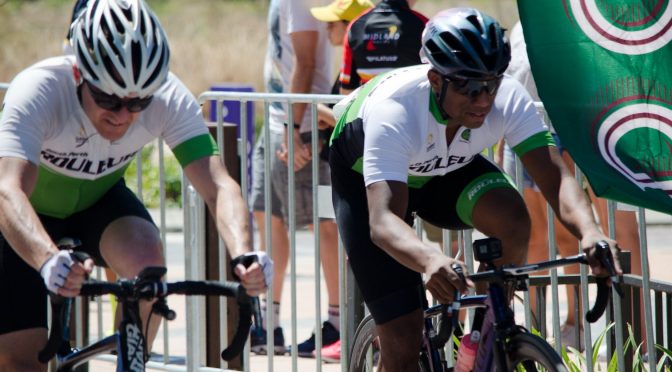 The Ring kicked off the season with a round on a new course in Mandurah. The first round of the year had a smaller field with SPR making up a large proportion of wheels. A hotdog format with a few roundabouts thrown in, it was likely to be a tough day out.

Men’s D grade saw Andrew “Big Willie” Williams time trialley styley to finish. Not bad for a bloke that before R-Adelaide hadn’t ridden up a hill since Varese in September. Men’s C had SPR field a few, with newbie Mark Claydon nabbing a podium 3rd in his first outing in race mode. T-Bo SuperCoach, Numbers Man and B Fairclough rounding out the finishers, but not the podium.

Women’s B too had a host of usual suspects – The Librarian, More Moore and Flockers, FlockFart, FlockingFast (hang on, we’re confusing ourselves) representing. Librarian was one place late returning and collected a fourth place for the day – nothing by a half a second in it, and less to More Moore in 5th. For the record, a New Wiggo is in B-Grade Town and Emily took the win.

Men’s B on paper looked like a true Young Vs Old (all offense intended). Ballam had a belter, attacking and hanging onto the fast lead bunch to the finish, Team Columbia close behind. This round was taken by Young, but with a Glasby and a Depiazzi in there too, there’s more kick from the Good Ol’ Boys yet. To B continued.

Men’s A looked like a slug-fest, with the best SPR-related finish a 3rd to Dome’s Tim Sellar – a far stretch!

Women’s A too boasted a number of Young ‘Uns. The hotdog format suited a hitter with a KICK! And so it was that a Chaotic finish (Chapeau on the wordplay!) had Teneal Attard take the win to a coupla Young ‘Uns. An Attard sambo, flanked by two Haines’. ½ a BaNabi a mere 0.01 seconds to 4th. A finish tighter than a frogs bum. Not to mention a Wiggo looming large in A grade. Hmmm.

Last Sunday the Ring Series returned to Wellard. As it was for last season, it’s a tough little circuit with a small but trying climb. The conditions were hot, so firstly congratulations to all of the SPR team that turned up to race.

The women’s C grade was the starting block to a great day with Nancy and Faye leading the charge of what looked at times like supervising Day Care. How quick are these up and coming kids?!?! A good turn out with 12 starters ended with the day’s first SPR success story – Faye riding a superb race to take 3rd. A top race.  Watch this space SPRouleurs.

The men’s C grade had a large field of SPR riders but in an early  crash, all but two SPR riders caught behind. Day done – they all lost time and never managed to catch the leading riders. Luckily none were hurt. At the front of the race Ben Fairclough and Mark Claydon held the SPR banner, with Mark launching a rocket to lead the field up the final straight and claim his first victory in only his second race – B grade calling? He now wears the yellow series jersey for the next round. T-Bo SuperCoach finished 20-odd seconds back and NumbersMan and Raf DNF-d behind the crash. AfterBurner and Jedsman, were allegedly at the scene, but not seen racing…. curious.

The women’s B grade had strong performances from Vanessa Johnson, Kirsty More Moore and Sam FlockingFast. Kirsty fired the AfterBurners (see what we did there?) to claim the Prime Sprint prize. Vanessa made several attacks up the hill – never listening to the advice of “Get Off The Front”. I mean, why would you – in the start finish straight where the cameras are (?!?!?!). Shedding riders in the process, narrowing the field but ultimately missing a podium whilst making a proper show of it. Sam, joining B’s this season kicks on AGAIN and ……. A great performance from all three. Kirsty took 5th, but it was Lawler, Wiggo, Richards for the steps. Emily Wiggins now smashing B grade…. Just when we thought it was safe from Danica stepping up to A’s. Hmph.

The men’s B grade had a large field of 35 and saw a serious crash, with 8 riders down including our own Team Columbia. Suffering cuts and bruises but luckily nothing worse to fight another day. Ballam, rather than looking FOR or a crash (Rumpelstiltskin, anyone?) chose to use evasive skills to avoid one. Nick Finch pushed his limits, made the field hurt and finished close to the front but could not hold on for a place. Ben Thorman, seemingly always on the front and must have pulled the field along for most of the race, held on for 3rd. Not bad after hills ride this morning, but probably could have won with fresh legs ;).

Women’s A grade saw a melting pot of the new bunch and some seasoned Hitters mixing it up. Half of BaNabi had to chase the field after a dropped chain on the first lap (Ballam is a rubbish mechanic, after all). The Dome girls competed well with M&M working tirelessly on the front. Bonner V2.0 too had a strong race, recovering to an eventual 4th after changing a broken wheel mid-race. It was Chaotic Energy’s Teneal Attard, from the front, producing a final attack up the finishing straight to hold off the field for her second Ring Series win and retains the yellow leader’s jersey. The results would show Attard, D Wiggo, Mascaro for the podium. Danica W in A’s and straight on the results board. Help us.

The men’s A was last to race and saw a number of no-Green kitted blokes out there. The Dome Team was well represented but no match on the day. In a stellar field no one was able to hold off local PDCC boy and current NRS racer Theo Yates (and his Mo), ANOTHER Wiggins and Lanigan.

All up a great day’s racing by all. And an even better tent set up from our VP, DrJ. Great pics from the day by David Menarry, and a lot of words from Steve Burns – more from him to come.

Next up for The Ring – Northam on SATURDAY afternoon. Not Sunday!