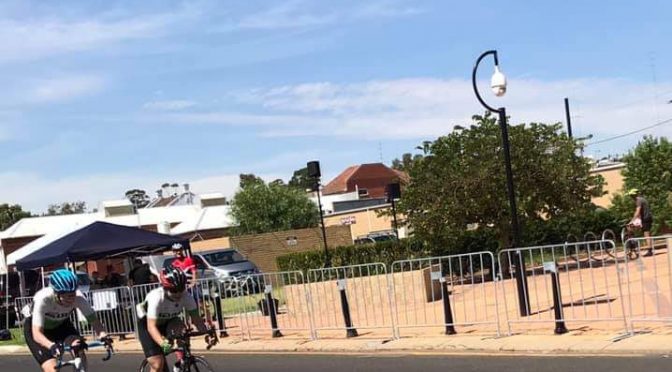 We open this race report with the breaking news of a Consumer warning advice message – there’s another Wiggins on the way. U13 Fay Wiggo placed 2nd. There are more Wiggins Wins in the future. You have been warned.

Northam, Land of an amazing pub. Of a Visitors Centre cafe that does one of the best coffees healthy breakfasts we’ve had in regional Australia. And land of some wide, open roads primed for Crit-ting. Cue the music………….

Women’s C grade, and our perennial race report inclusion (so it seems!) FDJ (our Faye, not the team of Frenchies) romped home with a 5th place, with Nancy close by in 6th. For some context, Faye and Nancy’s Best lap speed of 36.5km/hr was up there with previous B grades, with the winner over 37km/hr! Definitely a fast finishing bunch.

Token nickname time, back in the grade where all this malarkey began – C grade Men. The boys cracked nearly a 45km/hr best lap speed – there’s some serious speed to be had on this course, it seems. This round saw another podium for Mark Claydon with a 2nd – where’s your jersey?! (I guess it’s OK if you’re in the Series Leaders jersey, to be fair!). Other SPRouleurs were Ben Fairclough in 14th, with NumbersMan and SuperCoach a way back.

Mens B Grade provided all the pain faces – thank you Rumpelstiltskin and Woj. The rest of those boys need to pick it up. Best place for SPR was Team Columbia in 7th. Dome finished with Thorman, Woj and Half-a-Banabi wincing from 11th down. Get that crew a double espresso, pronto.

Women’s B grade – the seriously spectator ready grade – gave up another mixed bag of possible place options. Heavily contested, this week it was again E Wiggo for the win, suiting those young track legs in a flying finish. For SPR, More Moore took 2nd with a teeny tiny margin between. And The Librarian for 4th AGAIN! If anyone could make 4th the new black, we knew it was Ness. Flockers, with no excuses to offer, wasn’t on the start line. Oooowwwhhh – that’ll come back to haunt me.

Men’s A again hosted the PEOPLE’s CHAMP – Freiby*! (* – People’s Champ, in that I can’t think of anyone that hasn’t got a photo with him in the National Champs jersey). This week was the lone SPRouler of Elar, one half of Check 1-2, representing and finishing a creditable 10th for Dome. When will we see the SuperGroup of Check 1-2 reunited on stage? Craig, Elar – what will it take? A GoFundMe? A Change.Org petition? Ahhh, those were the glory days….

Women’s A grade showed where this season’s peak form seems to be remaining. It was a sneaky sprint up the left that gave D Wiggins the win with Teneal Attard in Chaotic livery with ANOTHER podium and 2nd place, retaining the series leaders jersey. Bonner V2.0 nabbed a 4th place. There were a few notable non-starters, whom shall be ribbed all week for no reason other than my own amusement….;). Half a Banabi – I’ll show you sneaky yet…..

In the Club based Series, points stand with MCC leading on 116, Peel on 76 and and SPR on 59 points. Watch this space though.

This week is Subiaco. Roads are closed. The travel there is less than 70km (yay!!!). It has a hill. Hmmmmmm. Rumour has it there may be a cowbell or two. Or eleven.