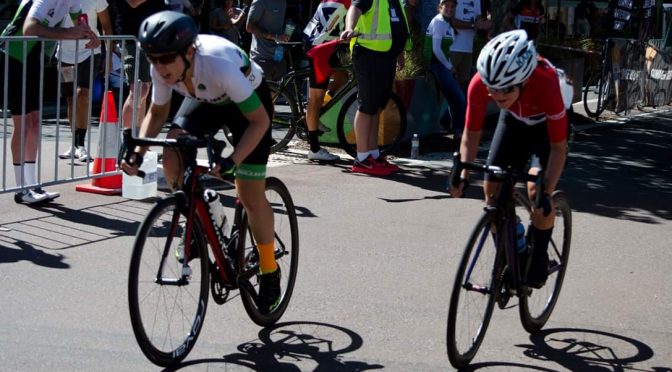 Criterium: a bike race consisting of several laps around a closed circuit, the length of each lap or circuit ranging from about 800 m to 2,000 m.

The Ring hit the streets of Subiaco for some good, down-home crit action. The course start/finish on Rokeby Rd at Barker Rd is on the peak of the 300m incline, so more people saw the true “simple” of Crits – start fast, go fast and keep going fast. Still sounding simple.  Sunday would show how far Perth crit racing has come in the past few years. Our SPR ranks started with C Grade women, finishing with A Grade Men with Elar in the Dome costume, but we’ll change it up, for dramatic effect……

Women’s C Grade, and once again FDJ and Nancy (The Technician, in all endeavours – seeeeerious precision in everything, people) rolled out onto course with a field of 12. Awesome numbers indeed. It was The Kids who got away with a small break in the second half. Kids that are half or a third of our SPRouleurs…… ouch. With nothing more than a few wheels gap required, a small split would grow quickly. FDJ and Technician finished 40 and 60 seconds off the winners for 6th and 8th places respectively – and respectfully. Oh yes, this was The Bizness. On this course, in this heat and with seriously strong whippet-up-and-comers to race against, Green more than held it’s own. Ring those cowbells. RING-A-DING DING DING!

Men’s D grade and Poodle copped and absolute sweat soaked spanking. With (again!!) a long list of up-and-comers, “Crit with big hill” is not what Poods ordered and not what Poods is best at. I mean, the pub is at the bottom of the hill. You’ve just removed the motivation to climb! Racing alongside Mr 1-2-3 and Dave Croft, Poods was last to finish on the lead lap in 19th place, and was within 16 seconds of the young victor – valiant as only Poods can be. Before retiring to a nice, cold, carbonated beverage.

Mens’s A grade was a Monster Class. And that’s not auto-correct. Henry Pennell broke early, but once he was absorbed back in the bunch, and fresh new hell was unleashed.  And that hell started with Cam Meyer. It was on. Cam led solo for a bunch of laps, lapping consistently at 43km/hr. So quick we struggled to cheer and then have a sip of beer before he came past again. Then it was Kalma, then Meyer, Kalma AND Freiberg. Monster Class, I say. The three smashed the field to pieces for 20 odd laps before Kalma jumped and took the sprint win. Exciting? Yup.

Teneal again came out swinging (figuratively – not literally) for A Women. A field including Dome, Mascaro, some Hitter from the Melb-Warny (OK, so seriously, she took 4th there), as well as a Bonner and a Tucknott. Looking at the MyLaps results, Teneal lead the race for 15 of 29 laps and sat 2nd for every other lap. Teneal motored home the sprint from the final corner with a clear gap to 2nd. Dominance. She stays in yellow another week. Only 5 of the Chix finished on the lead lap, including Half-a-Banabi and Bonner V2.0.

Men’s C Grade, or as I like to call it, Life Inside the Peloton. Oh, that’s taken. Anyway’s, 38 starters on a tight looking course, varied cornering abilities would make an interesting race. AfterBurner and Mo were stupidly placed at the rear of the pack for the start – with visibility of anything sketchy ahead, but no way of avoiding working harder to stay on. SPR in C had series leader Mark Claydon, AfterBurner, Raf, Ben, NumbersMan, Pete Seizovic, T-BoSuperCoach, Mo amongst others Green and not (BTW, it’s Green for the win, in case you’re considering other colours……).

Missing the jump, it was a fast pace straight off the bat, with the first 10 laps over 38km/hr. Laps 4, 6, 10 and 12 claimed near all the SPRouleurs. The Fast and the Furious……… Furious-ly chasing back on, that is. Only 15 of 38 finished, Mo the last one lapped on the bell lap. Although the single rider frame opportunities for pics whilst off the back…….. nah, not worth it. The win was taken convincingly by Mark Claydon, and he retains the Series Lead with an unbeatable break on series points.

Men’s B was a blistering pace, but with nought for SPR green in the pack and a hard day out for Dome, we had nothing to show except Ballam’s face o’ pain. And as good as it was, it ain’t for the kids to see.

Women’s B was again one to watch – fully biased, opinion based piece, right here. Librarian, More Moore, Flockers, Bex ……… and a Wiggo. Librarian and Bex made an early move and split the group, becoming a 7, then 6, then 5 chick race.

Arriving with baked goods to share with SPR, and despite moving along 3 teen kids out of school, Librarian’s work was never done – charging up the start-finish slope every time Bex wasn’t. An electric attack from Wiggo was short-lived, realising Bex and Lib’s were patient and there for the long haul of a short race. Having been gapped, throughout the chase Flockers lapped consistent times to the finish for a tough fought day out. Final lap and Wiggo went again, Librarian in 3rd, Bex for 5th. Mrs missed the podium, but won a Prime. Awesome. Unfortunately, she had no idea what a Prime was and has since forfeited the voucher to Mo (this is on the internet, so it must be true). Great teamwork , and well finished off, Ness.

All detailed results are HERE.

Next up is the Pemberton Classic over the long weekend, then the final round of The Ring at Northbridge.