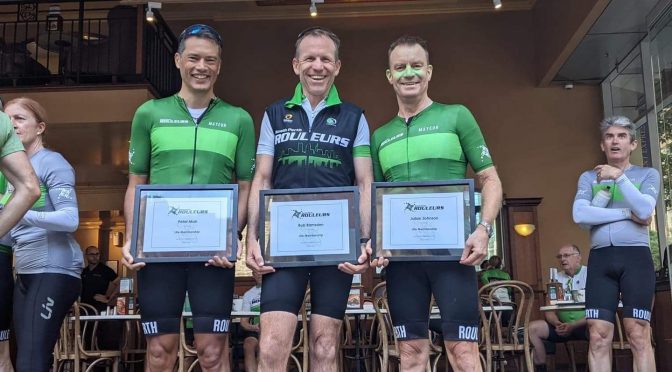 At our AGM last Saturday I announced on behalf of the 2020 Committee the admission of Peter, Julian and Rob as life members of the club. It seems fitting that the very first life member is @elprez. For those who missed this auspicious occasion, have a read below of their citations.

Peter was the inaugural President of the South Perth Rouleurs in 2009, and has been has been instrumental in the life and ethos of the club since that time. He was key in setting the original direction and has provided consistent, strong and visionary leadership in the role of President from inception through to his retirement from the Committee in 2021. In many ways, Peter’s involvement personally has provided the “face” of SPR in the eyes of both club members and the public. Peter was actively involved in the running of events, from the Water Tower Challenge (an innovation of the club and Peter in particular) through to the conduct of the “Tech Park Criteriums” that were a feature of the summer racing scene for a number of years. Notably, Peter has authored the club’s “ride routes blog” released every Thursday evening for many years, something that has become so much a part of the culture of the club that people get worried if the blog post runs late. Not to mention that over that time, Peter has also ridden 145,000 km. Peter was admitted as a Life Member of the South Perth Cycle Club in 2021.

Julian was an inaugural member of the South Perth Rouleurs in 2009 and Vice President from 2010. He has played a key role in the leadership of the club from that time until his retirement from the Committee in 2020. Julian has provided a steady hand and reliable advice to the club over that time. Throughout his tenure, Julian has been a consistent contributor to the club’s regular rides, always prepared to put up his hand and take responsibility for leading rides or taking steps to ensure that rides are safe and enjoyable. In addition to his contributions on and off the bike, during his time with SPR Julian has ridden 140,000 km, many of these in the Perth hills, his favourite. In recognition of this love, Julian was instrumental in starting the club’s Vice Presidents Ride which runs at Easter. Julian is known for his love of zinc and his willingness to wear maximally mismatching kit. Julian was admitted as a Life Member of the South Perth Cycle Club in 2021.

Rob was an inaugural member of the South Perth Rouleurs in 2009, a member of the Committee 2012 through 2013, and then again from 2016 through 2020 taking on the Training and Development role. In particular, Rob was responsible for bringing his “day job” expertise to the club in the development and execution of the club’s Ride Leader Program. This program is an innovation of SPR that seeks to enable the club to put on regular group rides for which safety and organisation are highlights. The program enables the club to train ride leaders, and then promote and recognise them as a key part of club life. Rob was both the author and the driver behind this program, which has been hugely successful and is today a key part of the life, ethos and culture of the South Perth Rouleurs. Other notable contributions include work on the organising committee for the club’s 10-year anniversary as well as volunteering & marshalling for many of the club’s races & events. Rob has been a regular rider with club and a regular Ride Leader himself – though it is recognised by most that he is allergic to any form of inclement weather. Rob was admitted as a Life Member of the South Perth Cycle Club in 2021.